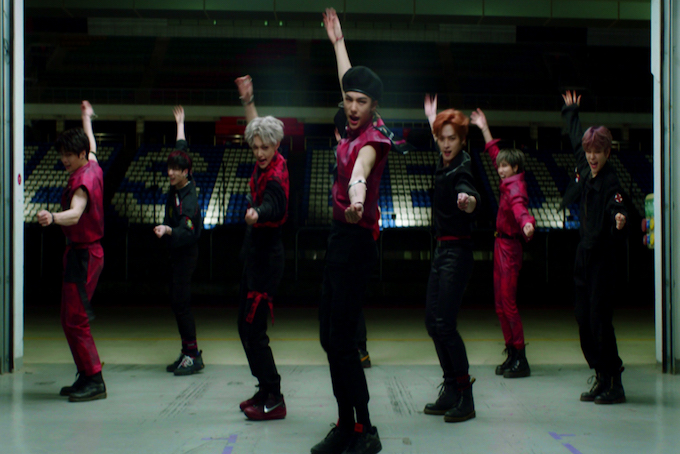 It’s been well over two years since Stray Kids made their debut. In that time, they’ve forged their own path in the K-pop world with their signature industrial EDM and hip-hop sound. They’ve also taken a brazen path lyrically, as they touch upon more serious topics such as identity and coming-of-age. With eight members, each of their personalities shine during their performances, resulting in a strong and ever-growing fanbase. And now, the band’s hard work has culminated into the release of their first full-length album GO LIVE, fronted by the lead single “God’s Menu.”

Big appetite? The group is here to cook up, serve, and satisfy your taste buds. Rapper Changbin begins with the cheeky opening line, “Yes sir and ma’am, welcome,” before the flurry of cooking references to come. They’ve also cooked up intense lyrics such as, “Hottest menus that will never cool off // imprint those flavors on your palette.” The song then erupts into the pulsating and literal “Du Du Du Du Du Du” gunshot chorus.

Felix‘s iconic rap verse, “Cookin’ like a chef // I’m a 5 star michelin // Reached the peak of taste // I see it illusion,” is one that won’t be forgotten any time soon. And the accompanying music video turns up the heat as well, as the members are no strangers to cooking up hits and making things happen. They appear and perform their choreography in various locations from a racetrack and a construction site to — you guessed it — a kitchen.

GO LIVE contains 14 total tracks including four that were previously released. Like usual, all tracks were crafted by the group’s internal producing trio of Bang Chan, Han, and Changbin, otherwise known as 3RACHA.

The titular intro track invites you into the polished world of Go Live — focused and confident, along with their signature pulsating beats and unique charisma. After “God’s Menu,” things continue to heat up with “Easy” and “Pacemaker.” The boys remain fearlessly defiant on these addictive and adrenaline-inducing tracks.

The catchy and melodic “Airplane” has some super sweet romantic vibes to it. And although songs about love aren’t a common theme for the group, we’re certainly not complaining. “Girl I will show you Neverland, I’m your Peter Pan,” Seungmin delightfully woos.

“Another Day” is a painfully relatable acoustic-tinged track that has the group singing about meaningless days and loneliness. “Phobia,” on the other hand, is another relatable and standout track highlighting the members’ vocal versatility. More high notes in the future, please!

And just when you think they’re letting their doubts get in the way, the group hits you with a track like “Blueprint,” making you instantly regret doubting Stray Kids and their ability to find their way. Leave all your worries behind with “TA” and “Haven,” though, which are songs that are clearly meant to be played with all the windows rolled down on your next summer road trip.

The final four tracks on the album include the Korean versions of their Japanese singles “TOP” and “SLUMP.” Production on both tracks are exquisite with their classic grungy style and explosive EDM drops. Finally, the previously released mixtape tracks “Gone Days” and “On Track” perfectly round out the Go Live journey.

The octet have been honing their representative, bold sound for over two years and their relentless ambition has resulted in their most cohesive and strongest album to date.