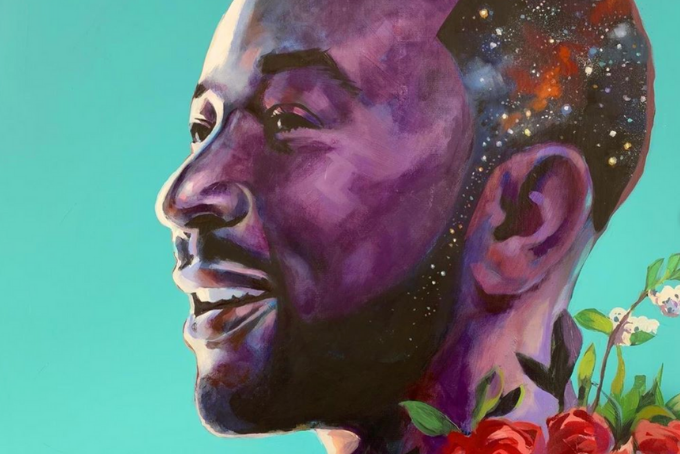 Multi-talented superstar, John Legend, has released his seventh studio album, titled Bigger Love. Releasing an album during a global pandemic is a daunting task, but John’s latest project is so full of love and positivity that everyone needs right now. The album has five amazing collaborations that add value to each track, including Gary Clark Jr. and Jhené Aiko. In order to promote the album and help important causes like prison reform, John is hosting a virtual concert experience to celebrate Bigger Love and the importance of staying connected during safer-at-home mandates.

The album starts with one of the singles and most interesting tracks, titled “Ooh Laa.” It’s a combination of the vintage doo-wop sound and a modern trap influence. It’s old meets new, classic meets current — unlike most music out today. John Legend has never been afraid to experiment with more classic sounds instead of chasing trends, and “Ooh Laa” is the perfect blend of both.

The second track, “Actions,” continues John’s homage to previous recognizable sounds. The track samples an iconic song from the 60s, “The Edge” by David McCallum, more well-known for the same sample used in “The Next Episode” by Dr. Dre and Snoop Dogg in 1999. The lyrics talk about being disingenuous in his lyrics as he lived the bachelor lifestyle but wrote songs about romance back in the days before meeting now-wife Chrissy Teigen. He sings, “Actions speak louder than love songs.”

I’m so excited to introduce my new album #BiggerLove to the world. Here’s the album cover painted by brilliant artist @charlylpalmer. Swipe for the track list, including my amazing featured guests. This project has been a labor of love for me, something I’ve spent over a year conceiving and creating. I poured my heart and soul into these songs and collaborated with some incredibly gifted co-writers, producers and musicians. The songs are inspired by the loves of my life: my wife, my family and the rich tradition of black music that has made me the artist I am. All of these songs were created prior to the world being rocked by a pandemic, prior to the latest police killings in the U.S. that sent so many to the streets in protest. During these painful times, some of us may wonder if it’s ok to laugh or dance or be romantic. Lately, the images of black people in the media have been showing us with knees on our necks, in mourning, or expressing our collective outrage. We feel all those emotions. But It’s important for us to continue to show the world the fullness of what it is to be black and human. Through our art, we are able to do that. This album is a celebration of love, joy, sensuality, hope, and resilience, the things that make our culture so beautiful and influential. I’m under no illusion that music can save the world or solve the world’s problems, but I’ve always turned to music to help me through tough times and I know many of you have done the same. That’s why I couldn’t wait to release this album to the world. I debuted in 2004 with an album called Get Lifted. And now, as we enter the summer of 2020, I hope this new album can get you lifted again, fill your hearts with love and inspiration, give you something to dance to, something to hold hands to, something to make love to. A week from today, on June 19, I invite you to experience a #BiggerLove.

The follow-up to “Actions” is “I Do,” a song about wanting forever and meaning it. The track was written with fellow superstar songwriter, Charlie Puth. The next track, “One Life”, was written by a conglomeration of talented musicians — John, of course, with accompaniment by Anderson .Paak and Cautious Clay. Each of them brings their own unique elements to the track, creating a smooth and addicting vibe with lyrics about appreciating every moment in life.

The standout track on this album is “Wild,” which features a beautiful guitar instrumental from the legendary Gary Clark Jr. Not only do John’s vocals shine extra bright, the guitar adds a depth of emotion that isn’t explored anywhere else in the album. With a simultaneously groovy and epic sound and lyrics like, “I’ll take the wheel, make you feel every touch,” it’s obviously perfect for driving with the windows down and enjoying the breeze.

Track No. 6 is the title track, “Bigger Love,” a joyous explosion of energy with an enticing Afro-Caribbean beat. The track is a collaboration of songwriting by John, Cautious Clay, and One Republic’s Ryan Tedder, with accompanying vocals from Natalie Imani. Like the album itself, “Bigger Love” is wide open with relevant lyrics like, “I don’t wanna think about nothing // The world feels like it’s crumbling.”

The next track takes us takes a slower pace and features the effortlessly beautiful vocal talent of songstress Jhené Aiko. “U Move, I Move” is the perfect sultry love song duet, featuring two incredible voices that sound like heaven together. “Favorite Place” continues the seductive energy with a slow but steady beat and lyrics that leave little to the imagination. The track was co-written with John’s previous collaborator and master songwriter, Julia Michaels. Keeping a five-track streak of sexiness, the next two tracks, “Slow Cooker” and “Focused,” combine cooking metaphors (very Chrissy Teigen-esque), romantic lyrics and seductive vocals.

Sneak preview of 'U Move, I Move' feat. @JheneAiko off my upcoming album #BiggerLove – out this Friday!

“Conversations in the Dark” has lyrics that will melt any hopeless romantic’s heart. The emotion is amplified by meaningful piano, guitar and choir elements. The track gives “All of Me,” John’s mega romantic smash hit, a run for its money. The following track, “Don’t Walk Away” brings a taste of Jamaica to the project, with dazzling island beats. The track features Koffee, a super talented Jamaican singer-songwriter who takes the sound to an elevated place.

After taking us to the Caribbean, John takes us back to 90s R&B in his collaboration with brilliant female rapper, Rapsody. It’s an undeniable stand out track on the album, with a beautiful marriage of John’s ad-libs and Rapsody’s clean verse. The last feature on the album, “I’m Ready,” features Camper, who is responsible for the almost eerie vocal loop throughout the song. The track was co-written by the ingenious singer-songwriter, Tayla Parx. The second-to-last track, “Always,” is a throwback to John’s fourth album Love in the Future. It was supposed to be on the album, but was voted out by one of the album’s producers, Kanye West. It’s a solid track that shows off John’s vocals and sentimentality.

The final track on Bigger Love was written prior to the COVID-19 pandemic but is extremely relevant to the resilience and compassion everyone has had to rely on through this tough time. When speaking to Apple Music, John described the song as, “an ode to love and hope and resilience, and the power of the human spirit, and I felt like it was the perfect way to close the album.” It’s a tear-jerking piano ballad, a.k.a. what John Legend does best. During John’s ABC Father’s Day Special, he performed the song while images of famous fathers and their children were shown on the screen. Among those images was the late George Floyd and his daughter, Gianna. It was a beautiful tribute to the amazing fathers out there — like John himself — and those who may no longer have their fathers in their life.

There’s a taste of everything on this album. Every place, genre, sound and topic. It’s an expansive album that can reach just about everyone, which is amplified in the title. In the midst of so much turmoil, John Legend brought us romance, joy and hope with Bigger Love.