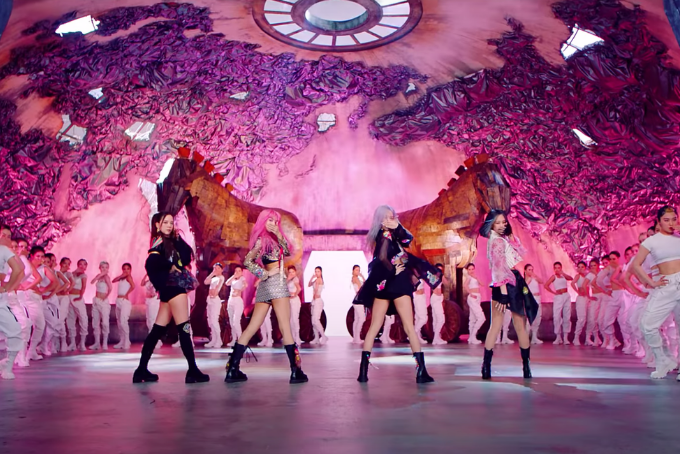 The fierce girls of Blackpink are back with their new single single, “How You Like That.” Naturally, their fanbase of Blinks, have gone crazy over the new song, music video and era. It’s their first new release since their last single in 2019, “Kill This Love.” But, the girls have been busy since then, collaborating with Lady Gaga on “Sour Candy” and premiering a YouTube reality series.

“How You Like That” is an anthem oozing with confidence, self-love and tons of sass. The ladies, Lisa, Jisoo, Rosé and Jennie, sound beautiful and truly look like goddesses in the video. Their vocal talent and dance abilities are unmatched, as per usual. The song starts with a cinematic intro, including the iconic tagline, “Blackpink in your area,” spoken by Lisa.

The song starts a bit sentimental and soft, with lyrics about reaching your lowest point. Having the song start off with a more reserved tone, sonically and lyrically, just makes the buildup to the chorus even more powerful. The first verse, sung by Jennie and Jisoo, is about someone watching your downfall and witnessing your lowest points. The pre-chorus, sung by Rosé, starts to talk about pulling yourself out of that dark place and proving that you’re better than those who want you to fail, with lyrics like “Laugh at me while you still can.”

With such a vulnerable start to the track, the chorus arrives in such a powerful way. The girls ask their haters, “How you like that,” and prove their worth with a cheeky, standout line, “Look at you, now look at me.” After such a bold energy switch, the second verse gives us a true gem: rapper Lisa. Her confidence is unmatched, with sharp, hard-hitting lyrics that will make anyone who doubts them do a double-take.

The bridge is where things get really epic, with extreme production indicative of a signature dance break (which we see in the video) and a nod to another one of their hits, “Ddu-Du Ddu-du.” The song ends on a bit of an abrupt note, only leaving us wanting more from this badass group of girls.

The “How You Like That” music video takes the already mind-blowing song to the next level. Blackpink has set the expectations high for music videos, with elaborate sets, perfectly executed dance routines and multiple outfit changes. The video starts as Lisa walks on set with a set of wings hanging over her head. It then cuts to all four of the girls sitting below the wings, clearly indicating that something big is about to happen.

Each verse, pre-chorus and chorus have a different set and aesthetic. The contrast of light and dark sets, like Jennie’s blue icy moment compared to Rosé’s dark underground set, bring viewers on a journey. More vibrant colors are introduced during the first chorus, which also gives us our first group dance number. As always, the choreography is polished and visually pleasing. During Lisa’s hip-hop-inspired verse, the set channels an Indian market aesthetic even using a live donkey to add to the atmosphere. During Rosé and Jisoo’s pre-chorus, the girls are wearing pink and red hues. The second chorus and group dance brings back the icy white and blue theme from the beginning of the video.

The bridge is the highlight of the video, with an intense group dance with energy levels that go through the roof. Like the song, the video ends abruptly after the best part, leaving you disappointed there isn’t more. “How You Like That” is the epitome of a strong comeback and Blackpink has given us consistent excellence when it comes to music videos, choreography and vocal abilities.