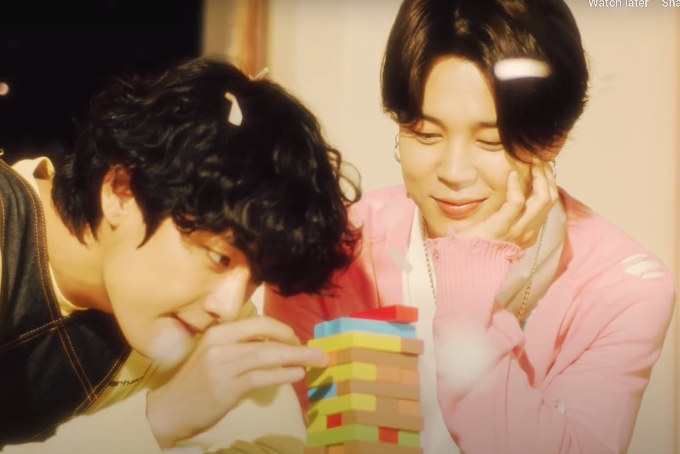 BTS are continuing to prep fans for the upcoming release of the Japanese version of Map of The Soul: 7 with a new music video for their Japanese single “Stay Gold.”

Much like its accompanying song, the video for “Stay Gold” is all about finding positivity in life and not letting bad times keep them down. It opens with the group’s seven members seemingly trapped in a ramshackle building. All of them are separated, perhaps signifying the loneliness they feel when they are away from each other.

When the chorus kicks in, there’s a complete tonal shift. Slow-motion shots show the group all together in the sunshine, enjoying their time together. It’s a quaint scene, with the members playing games with each other, petting a very adorable golden retriever, and overall, exuding happiness.

The following verses bring the group back to the dilapidated building — except this time, small bits of sunlight are beginning to seep in. Little sparks of light come through the dusty windows and under the doors, as if they are letting the group know there’s a better place beyond their dingy, dark prison.

The next chorus plays out in a much similar way as the first one, with slow-mo shots of the members smiling and jovial in a yard. Given the bombastic sound of the chorus, having the scenes play out so calm and casual was a bit of a surprise. One might expect a big dramatic scene to accompany it, but the group opted instead to show a more grounded side.

The final moments of the song show the members following the light, allowing it to lead them out of the darkness. They all come together on a path, entering a field that looks straight out of a fantasy film. Thousands of beautiful flowers surround them, and in the middle stands a beautiful tree aglow with light. It’s a breathtaking scene that continues the theme of contrast that BTS so often show in their work.

The video for “Stay Gold” comes across as more timely than ever in the middle of this pandemic. Although the video was most likely filmed before the world went into lockdown, there are parallels to life as we know it today; being trapped in our homes, unable to (or perhaps even scared) to go outside. The scenes of the members playing outside are so casual in its nature, reminding us of when it was normal to get together with friends and socialize.

It’s a reminder that even though times are tough, we need to hold on to the things that make us happy because there will come a time time when we will be able to enjoy those things again, and spend time with our loved ones. Check out the video for “Stay Gold” below.