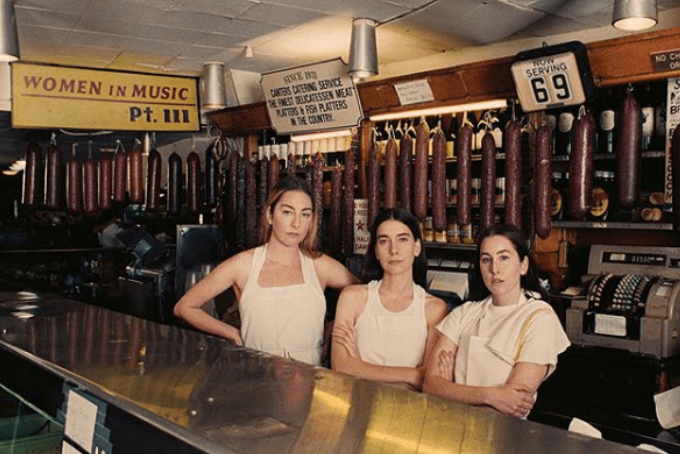 Last week, Haim dropped their highly anticipated third album, Women In Music Pt. III. The album is full of the sisters’ thoughts on love, pain and their enduring affection for their hometown of Los Angeles.

The album kicks off with “Los Angeles,” a sunny, low-key ode to LA: “And every time I think I might // Leave this city for the first time // I wake up on the other side // Wondering ‘Was I just dreaming?’”

Next up is “The Steps.” Released earlier this year, the song expresses the band’s frustration with how they are viewed by many of the men in their lives. “With this album, we were reckoning with a lot of the emotions we were feeling within the business. This album was kind of meant to expel all of that energy and almost be like, ‘Fuck it.’ This song kind of encapsulates the whole mood of the record… But I think this is the most fun song we’ve ever written. It’s such a live, organic-sounding song. Just playing it feels empowering,” said Danielle Haim in an interview with Apple Music.

“I Know Alone” was released toward the beginning of the pandemic, so it resonated with many listeners. “‘Cause nights turn into days // That turn to gray // Keep turning over // Some things never grow // I know alone // Like no one else does,” the band sings, seemingly resigned to isolation.

I know alone song and video out now. ps- the original plan was to release wimpiii later on this summer well fuck that we are gonna release it on june 26th, just in time for summer we can’t wait (link in bio) pps- if u wanna learn the dance .. the video is a tutorial 😜

“Up From A Dream” begins with a yawn before plunging into a grungy, chugging guitar riff that drives the song forward. “This song literally took five minutes to write, and it was written with Rostam. It’s about waking up to a reality that you just don’t want to face. In a way, I don’t really want to explain it. It can mean so many different things to different people,” Danielle told Apple Music.

“Gasoline” describes a casual affair that doesn’t seem to mean much to anybody involved. “You did me bad // And I did it back // You needed ass, well // What’s wrong with that?” The blasé lyrics are matched by the laidback production style.

The lyrics to “3am” speak for themselves: “It’s pretty self-explanatory — it’s about a booty call. There have been around 10 versions of this song. Someone was having a booty call. It was probably me, to be honest,” Alana Haim shared with Apple Music.

“Don’t Wanna” is another track that was released earlier this year. The sisters describe a relationship that they’re not ready to end yet, while a bright, retro-sounding guitar riff keeps the song moving.

“Another Try” has an almost tropical beat, with slightly distorted vocals. This song shows off the experimental production Haim has been playing with for the last few years.

“Leaning On You” is a sweet, simple song about finding someone who loves you for everything that you are and will help you get back up when you fall down. “I might forget to turn out all the lights // But you take care of me when I have to leave at dawn // I might sleep in past all my alarms // But you take care of us when I make it tough,” the band sings in harmony.

U.K.! sitting down with our producers @matsor @arielrechtshaid and a few of you for a deep dive chat into our new record, a Q&A, and a show. spots are limited and only accessible via an album preorder through @banquetrecords (link in story). u also get a signed postcard. can’t wait to share all the secrets of WIMPIII with u ❤️ tickets on sale tomorrow 11am GMT. see u july 3rd

“I’ve Been Down” is the last song the band wrote for the album. Danielle said, “This was super quick with stream-of-consciousness lyrics. I wanted it to sound like you were in the room, like you were right next to me. That chorus — ‘I’ve been down, I’ve been down’ — feels good to sing. It’s very therapeutic to just kind of scream it in song form.”

“Man From The Magazine” describes what Haim has to face as women in the music industry. “Man from the music shop, I drove too far // For you to hand me that started guitar // ‘Hey girl why don’t you play a few bars?’ // Oh, what’s left to prove,” they sing, before launching into the chorus’ cry of “Don’t make me hear // It is what it is, it was what it was // You don’t know how it feels, you expect me to deal with it.”

“All That Ever Mattered” is another experimental track from the band. The production features distorted vocals, a tinny guitar solo and a dry drumbeat that keeps the song grounded. “This is one of the more experimental songs on the record. Whatever felt good on this track, we just put it in. And there’s a million ways you could take this song — it takes on a life of its own and it’s kind of chaotic. The production is bananas and bonkers, but it did really feel good,” Alana shared.

wimpiii is finally out in the world. feeling pretty emotional rn. there’s so many people to thank that made this record happen but we’ll try to keep it brief lol. first of all – we want to thank all of you who have been here from the jump. It was scary to open up this much on record but with all your support it made us feel safe to tell our stories. thank you @matsor. from the beginning of this journey, when we started summer girl, you brought that song to life with your amazing production. writing and recording with you doesn’t feel like work- it feels like the most fun and spontaneous process!! you started this album off with so much heart and you worked day and night to make sure this album sounded the way we envisioned it. thank you @arielrechtshaid. you have been with us from the beginning, cheering us on, and bringing out something that we never saw in ourselves. thank you for always supporting us. you inspired us to dig way deep on this album and motivated the FUCK out of us when we were feeling really fucking down. we will NEVER forget that. watching you work and come up with ideas is our favorite thing. you and rostam are so dedicated to making shit sound next level and all those late nights payed off!! thank you to @emilylazarlodge for mastering all of our albums and making them sound MAGICAL. you’re such an inspiration to us and getting our masters back from you has always been our favorite part of the recording process!!!!! thank you to PTA (HAPPY BIRTHDAY) for always making the impossible possible. We thank our lucky stars that our paths crossed (they probably crossed somewhere at laurel and magnolia lol) There’s so many more people to thank that made this happen but for now we hope you enjoy wimpiii

The last track on the album is “FUBT,” a guitar-driven track about all the things in a relationship that are “fucked up but true.” The lyrics have a desperation to them, describing the extreme highs and lows the relationship goes through. “It’s about being in an emotionally abusive relationship, which all three of us have been in. It’s really hard to see when you’re in something like that. And the song basically explains what it feels like and just not knowing how to get out of it,” Alana said. “When we wrote this song, we didn’t really know where to put it. But it felt like the end to the chapter of the record — a good break before the next songs, which everyone knew.”

The next three songs are bonus tracks: “Now I’m In It,” “Hallelujah” and “Summer Girl.” These songs were released in 2019, but they definitely still fit the vibe of WIMPIII.

WIMPIII is an album that deals with serious topics, showcases the experimental production work the band has been playing with and is still chock-full of fun moments and earwormy grooves. This is one you’ll have on repeat all summer!