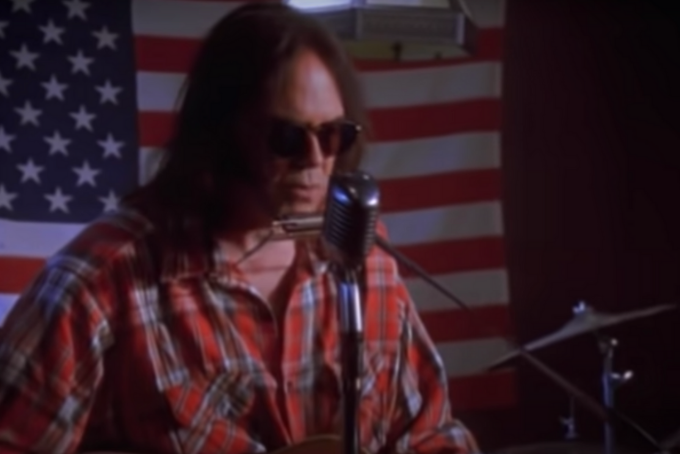 Earlier this month, Tom Petty’s family issued a disapproving statement after President Donald Trump blasted the late singer’s “I Won’t Back Down” at his rally in Tulsa, Oklahoma, without prior permission. It was only a matter of time until another artist’s music was exploited by the President without authorization.

The latest news comes from Trump’s Fourth of July event that took place on Friday July 3 at Mount Rushmore. Neil Young’s notable “Rockin’ in the Free World” and “Like a Hurricane” could be heard loudly in video footage of the rally. Young was clearly not happy with the soundtrack as he tumultuously expressed over Twitter by responding to the video with, “This is NOT ok with me…” He then posted another Tweet that read, “I stand in solidarity with the Lakota Sioux & this is NOT ok with me.” Young is referring to the location where Mount Rushmore was carved called The Black Hills. The Black Hills are home to the Lakota Sioux who attempted to block Trump’s rally from taking place.

This is NOT ok with me… https://t.co/Q9j9NRPMhi

I stand in solidarity with the Lakota Sioux & this is NOT ok with me https://t.co/iPVcFplOHa

What’s surprising is this is not the first time Neil Young has gotten into a tiff with President Trump about the fair use of his music. Back in 2015, “Rockin’ in the Free World” played directly after Trump announced that he was running for President. Young’s management company made an official statement that Trump was not authorized to use the track, especially since Young was a supporter of Democratic candidate Bernie Sanders’ campaign. Even though the Trump Campaign had purchased licensing of Young’s music, Trump’s campaign manager promised to respect Young’s wish and not use it moving forward.

Despite Trump being a major fan of Young’s music, Young does not return the feeling. Shortly after becoming a U.S. citizen earlier this year, Young wrote a public letter to the President beginning with, “You are a disgrace to my country,” and ending with, “We are going to vote you out and Make America Great Again.”

Over the years, other musicians such as The Rolling Stones, Pharrell, Guns N’ Roses and R.E.M. have either threatened to sue, or sent cease-and-desist orders to the President for using their music at his events and rallies. Who do you think is next?