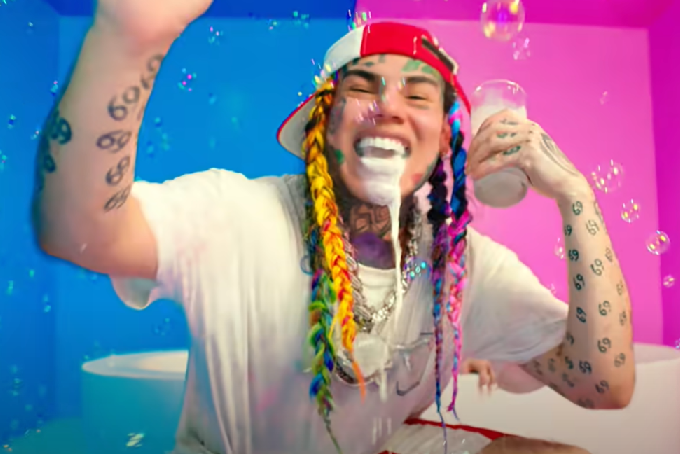 Controversial rap artist 6ix9ine has turned his remaining 24-month sentence under house arrest into a prolific and hit-generating tour de force, culminating in the club-ready Latin track “Yaya”. The rapper has been let loose in his own home following coronavirus concerns over his asthmatic condition. The single and its accompanying music video ⁠— the third and last in a saga of living room productions ⁠— dropped on July 3 to a hungry and revved-up fan base.

It’s a spectacle straight out of the Bad Bunny playbook. Its furious reggaeton beat exists in a bright neon room that adopts la morena as its muse. 6ix9ine is, for a first and rare instance in his aggressive scream rap oeuvre, evoking and igniting his Latinidad. The rapper teased the exclusively Spanish rap on his Instagram on July 2, writing “WE BREAKING THE INTERNET PARAAAAA MI GENTE LATINAAAAAAAAAAA LATINO AMERICA !!!!”

The video’s insistent milk and fruity-cereal palette hearkens back to “Trollz”, 6ix9ine’s previous house arrest single featuring Nicki Minaj and a whole lot of spilled milk. Visual euphemisms steam-power this release into a realm of playful suggestion, morphing brightly-colored wallpapers into Colombian, Brazilian, and Puerto Rican flags. Meanwhile, 6ix9ine asks for “una probaíta” (just a taste) and clarifies that he needs something a little stronger than water (“no quiero agua”). That bathtub? It’s actually a giant cereal bowl.

6ix9ine seems to be cashing in on a recent rave of reggaeton ravaging through the U.S. charts. As the descendant of Puerto Ricans, it is only his divine birth right. “Yaya” is equal parts a straight-ahead banger fitting neatly inside the SoundCloud rapper’s trademark as it is divergent material pointing towards a full future of surprising variety. If 6ix9ine’s house arrest must teach the quarantined masses anything, it’s that staying home doesn’t necessarily mean staying still, and that this man will find a way to turn his living room into a glorified cereal box.

One thought on “6ix9ine Releases Spanish-Language “Yaya” Under House Arrest”