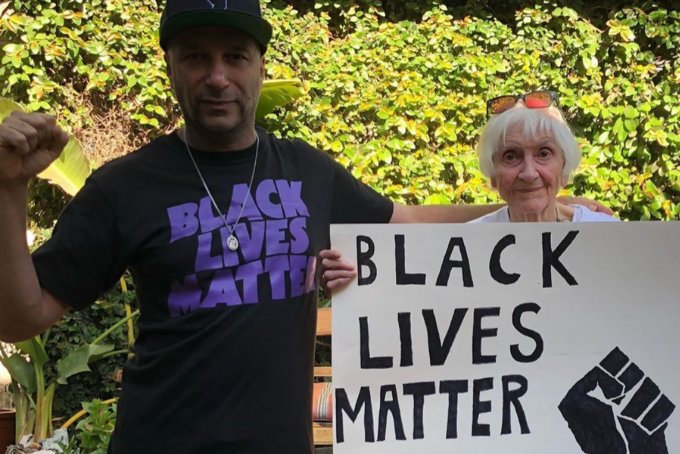 Never one to shy away from tackling politics and societal issues in his music, famed guitarist Tom Morello has released his response to the current unrest in the United States concerning racial injustice towards black people. Morello is also an active collaborator, and his new single “Stand Up” is no exception. The track features transgender artist and activist Shea Diamond, Imagine Dragons frontman Dan Reynolds and EDM artist The Bloody Beetroots.

The track is truly a product of the times; angry, urgent and demanding action. Sounding like a rap-rock track straight out of the 90s and early 2000s, Dan Reynolds kicks the verse off, with a flow and aggression people may not be familiar with from the Imagine Dragons frontman. “When I call the police // Will they just kill me? // Will they just kill you?” Reynolds questions over the relentless beat. The singer goes on to call out white privilege, following up with, “When I call the police // Will they just protect me // Cause I’m white-skinned, too?”

Shea Diamond takes on the next verse with speed and a smooth flow, never losing the classic soul-like tone of her voice. “Corruption in the blue line ripples out // Eruption in the streets bring the few and proud,” she declares. She also mimics Reynolds’ line about white privilege, tweaking the line to be directed at someone else. Both singers’ verses almost serve as a call and response, reminding one of the constant back and forth witnessed on social media amidst this conflict.

The chorus serves as a mantra, demanding people to “Stand Up // Cause your words mean nothing.” It could be taken as calling out so-called “slackivists” who just post about how they are outraged but are not actually getting involved in the cause. As the song makes loud and clear, this is a call to action, and the time of retweeting and using hashtags is over. As the saying goes, actions speak louder than words.

Shea Diamond wraps up the ending verses of the track with its most powerful lines. “If you walked a mile in my shoes // You’d probably take ’em off // Wouldn’t you,” Diamond challenges. After one more rousing battle cry from Reynolds in the final chorus, Diamond leads a chorus in driving the message home, repeating the mantra as a final request, or rather a final demand, to make a change.

“Stand Up” goes down the more confrontational path of protest songs, both calling out those who are inactive or ignoring the cause, while also saying that there is still time to join the fight. The track doesn’t mess around with fanciful metaphors to describe the situation; it screams out the truth of the matter, so loudly to ensure that they aren’t ignored.

All proceeds from purchases and streams of “Stand Up” will be donated to the NAACP, Know Your Rights Camp, Southern Poverty Law Center and the Marsha P. Johnson Institute. Also, KIDinaKORNER and Interscope Records, who released the song, will donate an amount equal to the artists’ royalties from the track for a 3-year period

Check out the official lyric video for “Stand Up” below!