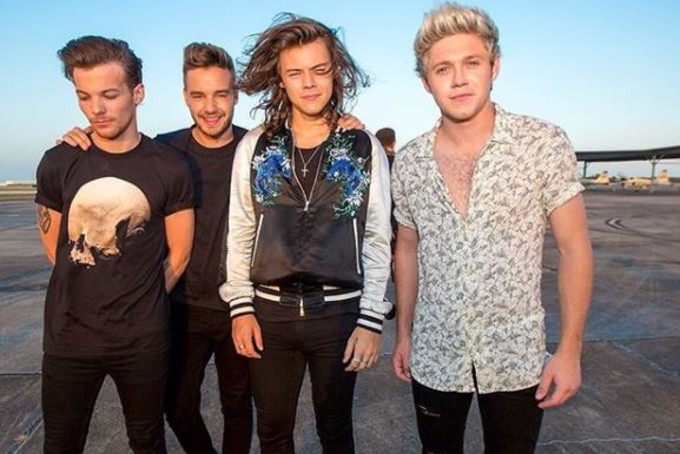 When super-group One Direction went on hiatus back in 2015 no one thought the break would last as long as it has. After Zayn Malik left the band in early 2015, the group announced their plans for a break the following August. With the band continuously stressing the idea that the hiatus would hinge on a two-year off-period to collect themselves, fans eagerly awaited news of a reunion from 2017 on. In fact, questions about the hiatus and the reunion have followed the members into the solo careers they’ve crafted for themselves over the past five years. When asked about plans to reunite, they’ve been quite mum on the topic. Yet, this July 23 marks the ten-year anniversary of the band’s creation and the tides have seemed to change. Here are all the hints we have so far that a One Direction reunion might be happening (even if it’s just for a ten-year anniversary):

When Louis Tomlinson was on BBC Breakfast for an interview to promote his debut album, Walls, back in February, he made the comment that the group getting back together would be “inevitable.” He went on to say, “I don’t know when. We don’t know when. I think we would be stupid not to get back together.” This idea has been a common comment made by all four of them over the years, yet the timeline has always been foggy.

When Niall Horan was on James Corden‘s famous Carpool Karaoke back in March while promoting his sophomore record, Heartbreak Weather, he was strapped to a lie detector where he was asked if he genuinely thought One Direction would get back together. Without hesitation, he said yes and passed the test. Yet, Niall Horan was asked directly about a ten-year reunion on the Zach Sang Show and he denied any concrete plans, saying, “We’ve got nothing planned. I’m sure we’ll meet up, but there’s nothing planned for it.” This sentiment was followed by Harry Styles, who also was featured on the Zach Sang Show in early April (remote, of course, due to COVID-19), when he stated, “Will we still be inside? I’m hoping not. That will be a very emotional day I’m sure.”

Yet, when he was on Sirius XM a few days later, the “Watermelon Sugar” singer was casually asked about reuniting with the other three over Zoom. We’ve seen several bands (like veteran boy band Backstreet Boys, who performed one of their classic hits together while from the comfort of their own homes) provide content together through Zoom. Styles coyly responded, “I don’t know if that’s the reunion that we had in mind. I don’t know if that would be the way to do it.” This makes us assume they have something in the works, even if it isn’t being publicly shared.

Alongside Styles’ comments in April, Liam Payne‘s statement that same month is what caused most fans to go into a frenzy. In an interview with The Sun, Payne confessed, “We’ve all been speaking together a lot over the last few weeks which has been really nice.” He added, “There’s a number of different things that we are all working on to try and make happen and people are forwarding emails around.”

Celebrity gossip column Page Six piggy-backed off these comments, to say that the group could be brainstorming ideas like a TV special or a new single. Since three of the members either postponed or canceled their tours due to COVID-19, there wouldn’t be a tour anywhere in the near future. But when Payne was a virtual guest on James Corden’s talk show, he remained tight-lipped about the details, maintaining that he’s “not allowed to say too much.” He went on to claim that they’ve been speaking more and the ten-year is incredibly special for everyone.

Shortly after, Payne and Horan went on Instagram Live together, to catch up and provide content for the fans. They casually mentioned a One Direction group chat, where Horan joked that even through FaceTime they couldn’t get everyone together in one place.

Later that day, Payne did an interview with Australia’s Smallzy and pulled back on much of his previous comments about the reunion. Instead of talking in absolutes, he backtracked with “The lines of communication are more open but reunion-wise, I don’t see anything happening right now.”

Throughout this time, though, internet-sleuth 1D fans have noticed a few aspects of social media activity that could be fishy. The One Direction official site was reactivate, and several Twitter lists were found to be public again, even if the exact date of the public posting isn’t known. Some fans have even claimed they’ve started to see YouTube ads about the boy band. In addition, Apple Music switched the band’s official photo back to one that featured Zayn, instead of the quartet of Horan, Tomlinson, Styles and Payne.

Although these hints have been growing, Payne joked that Tomlinson threatened to egg his house if he continued to share plans about the anniversary. Horan even went on a solo Instagram Live to do damage control and pull back on the 1D reunion rumors. He stuck with the others’ statements that “there’s just been a lot of talk about it, but no, there’s no reunion and such.”

Even more recently (July 1, in fact), Payne teased the fanbase further by posting a strange video on TikTok showing a screen-recording of him trying to FaceTime Harry with technical difficulties. As the video went on, he spliced a video of Styles during one of his virtual interviews with a radio show, before ending the call.

The conflicting testimonies are not abnormal, as it seems to be a track record with bands who reunite at some point. Fall Out Boy‘s Pete Wentz went on record a day before the group announced their comeback, denying all the rumors. The Jonas Brothers played tug-of-war with their hiatus, before coming back and dominating the entirety of 2019. My Chemical Romance blew off talk for years, before their long-awaited reunion. So, it isn’t far-fetched to believe that there are hints a One Direction reunion might be happening July 23 (while misdirecting everyone in the meantime).

With all the hints that have come about and made it look like a One Direction reunion could happen, it brings much anticipation for the end of this month, to see what occurs for the anniversary. Even if the reunion, right now, is just a ten-year anniversary present to the fans, it’ll be nice to see the band back together.