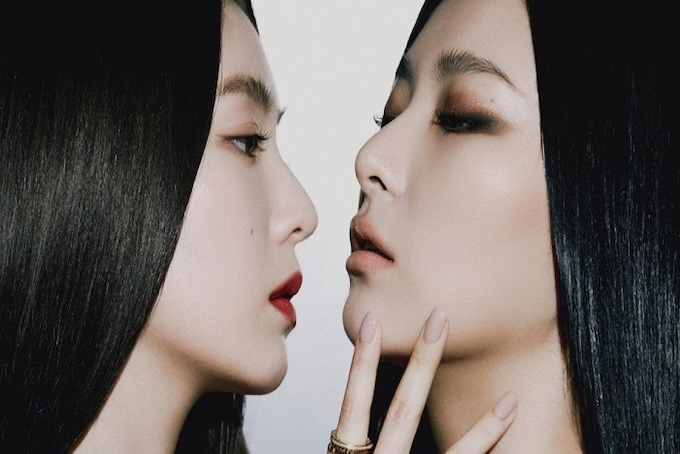 The five ladies of Red Velvet have been stealing hearts for nearly six years, but now we get to experience their first subunit. The powerhouse duo, consisting of Irene and Seulgi, has released the debut Monster EP and title track under the same name.

“Monster” isn’t your typical summer comeback jam, but its alluring and wicked concept is still a treat when it comes to Irene and Seulgi. The song opens with an intense, horror-like vocal effect, before they jump into their sultry verses. The effect is once again utilized in the chorus, infused with a dubstep breakdown.

Lyrically, they radiate confidence and aren’t afraid to harness their darker side: “I’m a little monster, be scared of me // I’m bothering you making you dream only about me // I’ll dance and play as I cast a spell // On your body in a nightmare.”

The accompanying music video is just as powerful. The duo performs seductive choreography amongst mysterious and dark imagery. Seulgi, at one point, wields a gun in her hand — and we’re terrified, but also captivated.

Monster contains five new tracks, including a solo track from Seulgi. “Diamond” is a mid-tempo R&B track that contains the sultry feel that’s present in many of Red Velvet’s singles. Once again, they preach about individuality and being a “diamond in the rough.”

“Feel Good” is a catchy and minimally-produced track that has some surprisingly twisted lyrics, despite the happy-sounding title. Love can makes us do some crazy things, right? The sweet-sounding “Jelly” has pretty relatable lyrics that capture the tormented feelings one might have over someone else. Seulgi’s “Uncover” is an inspirational slow jam that shows off her crisp and delicate vocals.

Ultimately, most of the tracks on the EP aren’t as impactful as one would have hoped, coming from the massive talent behind-the-scenes. However, we’re still liking the unique-sounding title track and the overall laid-back vibe of the album.