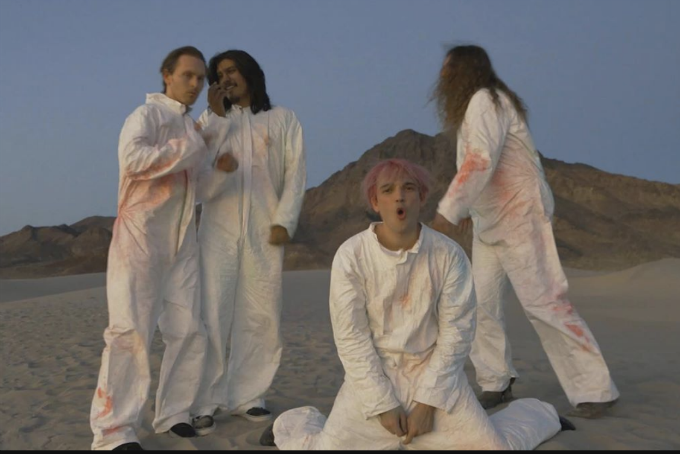 Josh Katz, singer of Badflower, just turned 30 and he wants everyone to know how he feels about it. “30” is the first single that the Los Angeles-based band has released since their epic debut last year, OK, I’m Sick. Unsurprisingly, this song manages to encapsulate the confusion of growing old with everything chaotic going on in the world (and in our heads). Badflower even manages to portray that feeling in their carefully choreographed “30” music video.

Badflower has a knack for storytelling in their lyrics, and this new single is certainly no exception. As expressed in some previous songs, Katz has a fear of growing old. So, why not share that fear with everyone? Not only does Josh openly discuss his distress about aging, but the song also gives a taste of our distorted society. Lyrics like, “ I’m not shelved ’cause sex sells. But how long ’til I’m canceled?” are both witty and telling. “So get off your asses and take down the masses / Socialist, fascist, the world is all plastic,” is even more straightforward. It truly feels like they’re speaking straight to our tired souls.

Musically, Badflower tends to have quite the range, from absolute ragers to ballads that have made us cry. We’d be happy either way, but we’re extra excited for this single that makes you want to get up and dance. “30” offers heavy strings and drums thanks to the talented instrumentalists Alex, Anthony and Joey. Mixed with Josh’s screams and maniacal laughs, we are loving all the playful guitar transitions and powerful drums. “30” also does an incredible job of shifting sonically through different sections of the song. There is a bit of something for everyone on the track.

I wanted to write a song about how I’m feeling internally and everything happening around me in 2020 as a 30 year old. "30" is out now. 🎂https://t.co/irfY1fLzz9 pic.twitter.com/gaPYsCOo70

If we haven’t hyped up “30” enough, maybe it’s time for you to watch the music video. It’s artfully filmed by the Badflower and their friends, and it’s overflowing with societal imagery and fan Easter eggs. The band has the whole video choreographed from a dramatic Josh smashing his birthday cake to the band doing a TikTok dance in the desert. If you wanted a socially distanced concert, a political protest, emoji faces, and fireworks all in one video, look no further. The attention to detail is incredible, and you might have to watch multiple times to catch everything.

So, what’s next for Badflower? Hopefully some more singles coming soon. We don’t have an exact date for the sophomore album, but “30” is keeping our ears happy in the meantime. When it’s safe, we would love to jam out to “30” in person. Until then, we’ll keep on streaming and maybe even learn the dance from the music video. That shouldn’t be too hard, right?