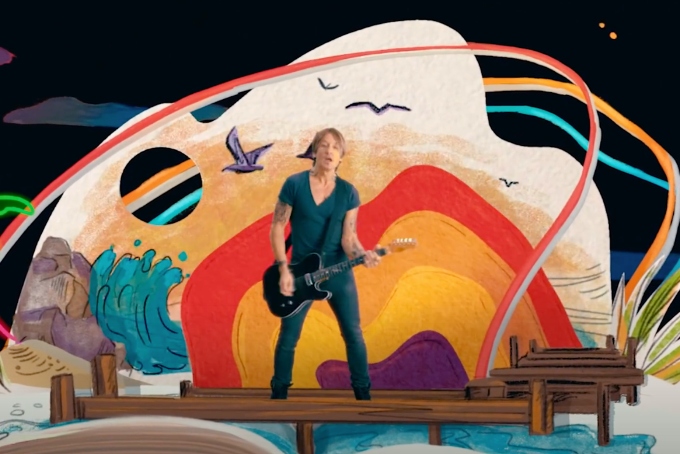 Australian Country music star Keith Urban has released his latest single, “Superman,” off his upcoming album The Speed of Now Part 1, which is set to release later this year. This new single was accompanied by a very trippy animated music video that is just as incredible as the song itself. Fans are in for a real treat if they haven’t watched the video yet, which is easily one of Urban’s most creative adventures to date.

The country crooner announced the release of the single and music video on Instagram just before it dropped, and fans were instantly intrigued by the teaser. They could instantly tell that the music video was going to be a different than anything Urban had done before, and they were certainly right about that.

“Superman” is all about reminiscing on an old relationship and how much life and color that person brought into Urban’s life. This is shown in the beginning of the video with all black-and-white imagery, but soon shifts into a full spectrum of color once the chorus hits. It’s definitely fun and also pretty trippy, too.

The single also pays tribute to old songs, which gives it a bit of a throwback feel. Especially with lyrics like, “Where we were Johnny and June in a ring of fire” and further creating a mental picture of a time where the couple was still in love and having the time of their life. “I keep thinkin’ ’bout that summer, South Daytona Beach,” he sings. “We never left the bed, no, we never got no sleep// And I been lookin’ back and thinkin’ ’bout the way it was.”

Painting pictures of past relationships through lyrics is not something that Keith is a stranger to. His songs “We Were,” “You’ll Think of Me” and “Somewhere in My Car,” all use that same tactic, but the major difference between those and “Superman” is that “Superman” is up-beat and playful, and not as sad and lonely as the others. Reminiscing on the good old days can be fun, and “Superman” is proof.

Following the release of the single, fans are more excited than ever about for the new album to drop. And if any of the newly released songs are an indication of the rest of the LP, fans are be in for a fun musical rollercoaster from start to finish. We can only hope that there are more fun music videos to come, but only time will tell.