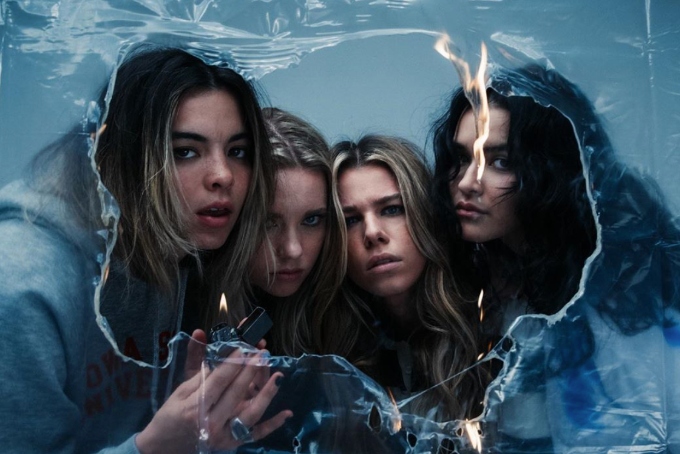 The wait for the Aces‘ sophomore album is finally over! Under My Influence dropped last week, two years after their debut album, When My Heart Felt Volcanic. The album continues the band’s indie-pop sound while showing off the group’s growth as songwriters.

The album kicks off with “Daydream,” the first single released. “We wrote over 60 songs for this record, and ‘Daydream’ was really the last song we did. We didn’t even think it was gonna make the record — we had already finished all of this music we were super in love with, and ‘Daydream’ just didn’t fit,” said lead vocalist and guitar player Cristal Ramirez to Billboard. “….I found the song again. I was like, ‘Wait a minute, this song is so good!'”

“New Emotion” is driven by a funky guitar riff and four-on-the-floor drumbeat, giving the song a disco feel. The song details a brand new crush on someone: “What’s this new emotion that I’m feeling / When I’m around you?”

“Kelly” is a tropical bop with a Santana-like guitar riff closing out each chorus. The song is one of the more personal ones for the group. “I think there’s a lot of songs that can be light on queerness — for us, it was like, ‘If we’re gonna go there, then let’s go there.’ That’s why we have very queer, upfront sexual lyrics. We’re queer. We’re talking about real relationships we’re having,” said Cristal. Drummer Alisa Ramirez calls it her “favorite song to write.”

“Can You Do” is an uptempo, high-energy song filled with sensual lyrics like “Got you down on your knees / I’ll show you what a girl needs.” The group sees this song as an indication of their growth as a band and as people. “What makes it so interesting is that I think the song is the first real embrace of our sexuality — as in us being sexual beings and grown women. We wanted to take on the perspective of the stereotypically masculine side. It’s this badass moment of owning being a sexual person. It felt very grown to me,” said Cristal.

“All Mean Nothing” wouldn’t sound out of place on an early-2000s movie soundtrack. The song is a smooth, slinky account of the confusion you can feel after a relationship ends. “Thought we had something / Did it all mean nothing / All mean nothing to you?” the group sings over crisp drum beats.

The Aces are from Provo, Utah; a detail that comes in handy when listening to “801” (the area code for Utah). The song is chill, the lyrics delivered in a laid back style that shows the listeners how the group has grown past their Provo days: “Growing up in the 801 / there’s only one club / so we blow it up / Leave your church shoes / and your Sunday clothes / but bring your guilt / and we gon’ let it go.”

“I Can Break Your Heart Too” features the band’s signature slick guitar sounds and sharp drum beats. The song deals with the frustration that comes from a relationship where you’re constantly fighting for the upper hand. “I think the first time I heard ‘I Can Break Your Heart Too,’ it was, lyrically, so amazing to me the first time I heard it,” said bass player McKenna Petty. “I think Cris and Al were so clever in how they wrote it. In the bridge, especially, it’s such an accurate representation of a thought process you would have about someone, or about a relationship. It’s so good.”

The second release off the album, “Lost Angeles,” is another song that’s close to the band’s heart. It describes how hard it can be to live in a new and unfamiliar place, especially a big city like Los Angeles. Alisa told American Songwriter, “We’re all in our early 20s, and that’s right around the time most people spread their wings and leave the nest and maybe move to a big city and face independence for the first time….’Lost Angeles’ is baring all those feelings from that typical, young adult experience. It starts off exciting and fresh and fun, but then it goes somewhere sad and lonely.”

“Not Enough” tells the story of a relationship where nothing you do is enough to fix things. “To me, this is one of the most heartbreaking songs on the record,” said Alisa.”One of the most heartbreaking things you can go through in life is being deeply in love with somebody, but realizing that it just isn’t enough, you guys are just not right for each other. That realization and coming to peace with that has been a big part of my personal maturation.”

“Cruel” is a song for everyone who’s ever fallen for someone they know is bad news. “Why’d I have to love something bad? / Can’t you go and hurt someone new? / Why protect myself to give it all back? / How am I back to square one with you?” the group sings over shimmering guitar licks.

While the album mostly deals with relationships gone sour, “Thought of You” is an ode to a dream girl. “So I’ll hang on, hang on / hang on ’til I find you / and your love, your sweet love.” Alisa said of the song, “‘Thought of You’ is really a love letter to that future person you haven’t met yet, but that you know is out there.”

“Going Home” is another love song; Alisa compares it to her own relationship and Cristal drew parallels between the band and their fans. “As long as it’s just you and I / it feels like I’m going home,” the band sings over a sparse beat and another catchy guitar lick.

The album closes out with “Zillionaire,” a retro-sounding groove about love being worth more than money. “All the money in the world / wouldn’t matter to me, girl / You’re the one that makes me feel like / I’m a zillionaire.”

Under My Influence is a perfect summer album, full of catchy beats and lyrics you’ll want to scream out your car windows. It’s also a great example of how The Aces are growing as artists.

Check out Under My Influence here!