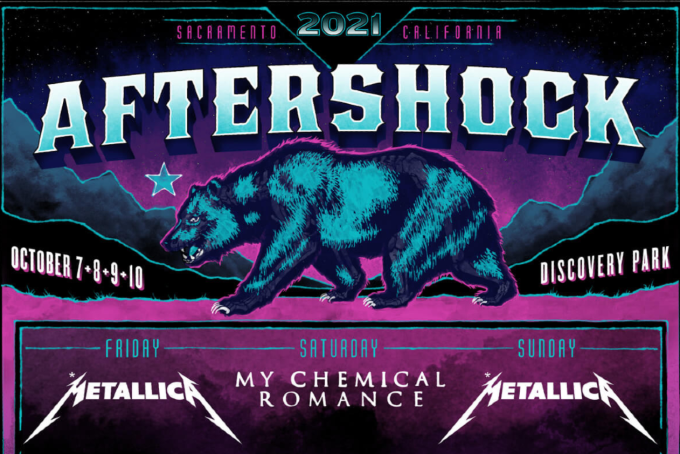 With concerns over resuming live concerts due to the risk of spreading the coronavirus, many concert organizers are expecting to wait until 2021 to resume business as *somewhat* usual. Aftershock Festival is one of the latest events to officially announce that they will be rescheduling this year’s festival to next year.

The festival, due to take place October 9 – 11 in Sacramento’s Discovery Park, will now take place October 7 – 10 2021. As part of this announcement, Aftershock also confirmed that Metallica and My Chemical Romance will be headlining. The festival’s production and promotion company, Danny Wimmer Presents, have also added a fourth night in partnership with Jack Daniel’s. This extra night will be completely free for festival pass holders.

October 7-10, 2021. We're SO ready for you 🤘 Reminder: deferring your 2020 passes to 2021 gets you free admission to the newly added Thursday night! Don't have passes? Join our waiting list via our link in bio ⚡️

In a statement posted on the festival’s official website, the DWP team stated:

“After all the harm caused by COVID-19, there is nothing that we wanted more than to be celebrating Aftershock with you this October at Discovery Park for what was going to be a monumental weekend. We, the artists, and Sacramento County all thought we had a shot at being the first post-COVID festival to happen. That really would have been incredible. We waited as long as we could but, unfortunately, the recent spike of cases now requires that we reschedule this year’s sold-out Aftershock to 2021.”

The festival went on to state that all passes purchased for this year’s event will be valid for the rescheduled dates. Emails will begin to be sent out to pass holders today with further details, including the option for a full refund.

At this time, Metallica and My Chemical Romance are the only confirmed acts announced. Aftershock says that the full festival line-up will be announced later this year in October.

You can read the full statement from the DWP team sign up for the Aftershock 2021 pass waitlist here.