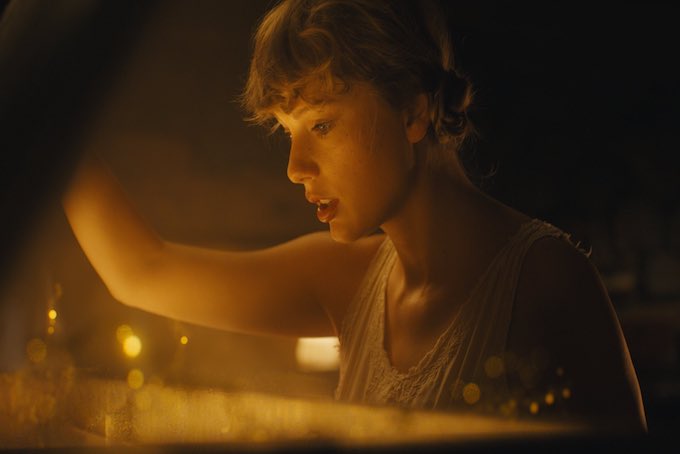 When it comes to Taylor Swift the singer is always full of surprises. But the biggest Taylor Swift Swiftie shock of all time definitely came last week with the drop of her eighth studio album, Folklore. Tagging along with the drop of the album, Swift announced that she was releasing a music video for the album’s lead single, “Cardigan.” And when we say the music video was magical, we mean it.

The music video for “cardigan” will premiere tonight, which I wrote/directed. A million thank you’s to my brilliant, bad ass video team – cinematographer Rodrigo Prieto, producer Jil Hardin, executive producer Rebecca Skinner, AD Joe ‘Oz’ Osbourne, editor Chancler Haynes, special effects wizards David Lebensfeld & Grant Miller, and set designer Ethan Tobman. The entire shoot was overseen by a medical inspector, everyone wore masks, stayed away from each other, and I even did my own hair, makeup, and styling 😂

When it comes to Swift’s songs, she has made it known that all the songs have several little Easter eggs embedded in them. And with “Cardigan,” there are so many that it is almost overwhelming to start. The track begins with a clicking sound similar to the sound of “high heels on cobblestones,” which can be connected to another track on the album. As Swift mentioned on her YouTube livestream “… there’s a collection of 3 songs I refer to as The Teenage Love Triangle. These 3 songs explore a love triangle from all 3 people’s perspectives at different times in their lives.” With her incredible talent of storytelling, Swift turns “Cardigan” into one of the three tracks encompassed in this story.

The track also refers to Joe Alwyn and Taylor’s relationship with the lyric “to kiss in cars and downtown bars,” connecting the dots to Swift’s “Delicate.” Produced by Aaron Dessner, “Cardigan” continues to keep its magical, fairytale feel.

I knew you tried to change the ending, Peter losing Wendy. The #cardiganMusicVideo is out now.

Swift’s music video for the single encompasses everything that happens in a real fairytale, not just the ones that are read to us. It kicks off with Swift playing a piano inside a dusty cottage-like room. She then transports to a magical rainforest-like area, which is full of daylight and sunshine and everything mysterious and happy. Things take a turn when she then transports into an ocean, where she finds comfort by holding onto her piano to stop herself from drowning (for all our Haylors out there, here’s the “Falling” parallel). At the end, Swift is seen sitting back in the cottage hugging herself in a cardigan. The music video ultimately encompasses how there are so many different aspects of a fairytale, which do not always result in a happy journey.

Despite putting our best efforts out to review the music video, we can guarantee no amount of descriptive words can show the story behind the song until you watch the video. Let us know what you think about Swift’s “Cardigan” and its accompanying music video.