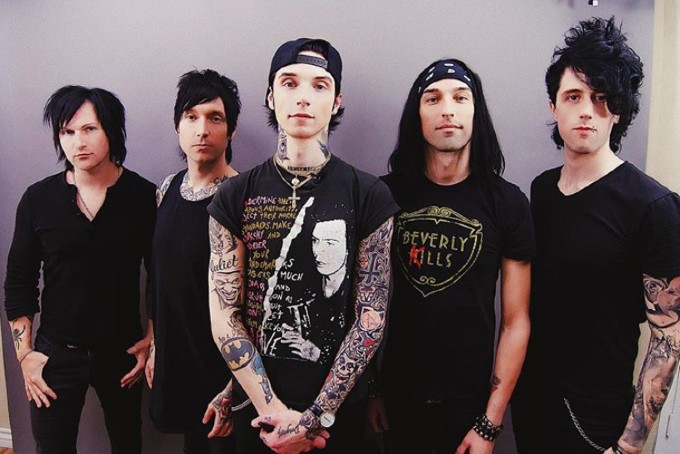 On July 20, 2010, Black Veil Brides released their debut record, We Stitch These Wounds, that launched the group into the Billboard 200 Chart. “I can remember writing so many of these songs in the tiny Hollywood apartment Jake and I shared and tracking our own demos,” lead singer Andy Biersack shared on his Instagram.

On Friday, July 31, Re-Stitch These Wounds was released as a rerecorded version, demonstrating their growth and progression over the years. Biersack continued, “To have the opportunity to take a look at these songs again, and update them for the modern era of the band with Jake at the helm producing and mixing is a full-circle moment for us. We have never been happier as a band and it’s amazing to get the chance to start over and do with this record what we always wished we could have the first time around.” In addition to the remaster, BVB performed the album in full at the Whiskey A Go Go in LA on Saturday, August 1, via a Veeb live stream. The historic venue is the home of one of the band’s first live shows. What better way to celebrate 10 years?

10 years ago at the Whisky a Go Go this photo was taken! Today we take the stage again for a live stream concert experience performing Re-Stitch These Wounds in it’s entirety for the first time ever! The show starts at 2pm PST, if you don’t have a ticket you better head to BlackVeilBrides.LIVE and get one, because you won’t want to miss this!! – #blackveilbrides #bvbarmy #restitchthesewounds #live #livestream #concert

Re-Stitch These Wounds isn’t meant to be a replacement for the original album, but rather a companion piece to illustrate the musical evolution in a unique way. They really outdid themselves. As Biersack mentioned, lead guitarist Jake Pitts produced, recorded and mixed the entire record in his home studio. Each member of the ensemble demonstrated growth in their work.

The vocals are noticeably much more refined, whereas on the first album, they sound very rough. And Biersack has really improved his vocal technique. Many wondered if he would continue screaming, since on recent releases they fell short. He certainly delivered. The technique he is using is much safer now than in the past when he focused more on fry vocals.

The guitars are much more intricate, and some of the tracks have changed a little, like “Carolyn.” It’s definitely a fan favorite but doesn’t always get enough recognition. It’s absolutely beautiful and is dedicated to Pitt’s late mother.

In an interview with Guitar World, Pitts and Jinxx opened up about writing the solos.

Pitts said, “I wanted to see where I could spice things up a bit or make it all sound a bit more tasteful. I didn’t want to drastically change anything or totally rewrite them, so it was more about taking it to the next level and seeing if I could outdo myself. I just wanted to find some extra flair and add a few special or memorable moments in there. I think we pulled it off pretty well!”

Jinxx added, “There was so much pressure in the studio originally, forced to do a solo on the spot. Re-recording everything, we could take our time with it all. I remember hearing some of my original rhythms thinking, ‘How the hell did I do this?!’ And it was the same for Jake relearning his solos.”

Drums and bass were tracked by Christian “CC” Coma and Lonny Eagleton, allowing them to put their own flair to it. Neither of them played a hand in the initial record, as CC came on just after its release, and Eagleton came on board toward the end of 2019.

me thinking I would hear Andy singing in "The Mortician's Daughter" #Restitchthesewounds pic.twitter.com/3Yy50wE16V

Jinxx is not only a guitarist, but he also plays the violin, piano and cello. We first saw his orchestrated talents on Wretched and Divine, and we were graced with it again on Re-Stitch. For “The Mortician’s Daughter (Overture III),” we were surprised at first to find out this was an instrumental rendition. It’s another fan-favorite, so there was some initial disappointment, but the change makes a lot of sense. The song was written about Biersack’s ex when he as around 17. Given that it’s 10 years later and he’s now married to Juliet Simms, it wouldn’t feel right for him to sing those lyrics. Jinxx created a beautiful track for the song as his third overture. And it’s very fitting for a more mature band that has clearly grown up.

We were also curious to see how the group would rework “The Outcasts.” It has a roughly 30-second intro spoken by Biersack’s late grandfather and leads right into “We Stitch These Wounds” on the original album and before “Perfect Weapon” in the music video. We are pleased to say that they still kept his grandfather’s voice on the rerecorded version. It’s a special piece of the album and the band’s history, especially for Biersack. The intro has been remastered to sound darker and actually a bit scarier than the original — a very interesting take, but we think it’s a great improvement.

Some of our favorite moments from our virtual concert yesterday. A huge massive thank you to everyone that bought a ticket and joined us as we played Re-Stitch These Wounds in its entirety. If you couldn’t make it to the live airing don’t worry! You can still stream the show until 2pm Pacific time tomorrow. blackveilbrides.live LINK IN BIO LINK IN STORIES 📸 @notsofatmike

We’ve seen many bands go on 10-year anniversary tours for ‘X’ album before, but we didn’t think that was ever the plan for Black Veil Brides, but we definitely aren’t complaining. They were able to do it in one night for the whole world, and it served as a special treat for long-time fans.

After the show, Biersack went online again to say, “Thank you from the bottom of my heart to each and every one of you who watched our #restitchthesewounds album release virtual concert. Words cannot describe how amazing it felt to be back on stage performing those songs and while I know that the world has changed quite a bit over the last few months, to have the opportunity to play a show in any capacity was a thrill for all 5 of us. You have given us so much over the years and we are forever thankful for your support!”

I want to say thank you from the bottom of my heart to each and every one of you who watched our #restitchthesewounds album release virtual concert. Words cannot describe how amazing it felt to be back on stage… https://t.co/DdkcOqrkAc

The band is currently working on their next album. Through several interviews, they revealed it will be another concept record. Timeline wise, it’s looking like it’ll drop some time next year.