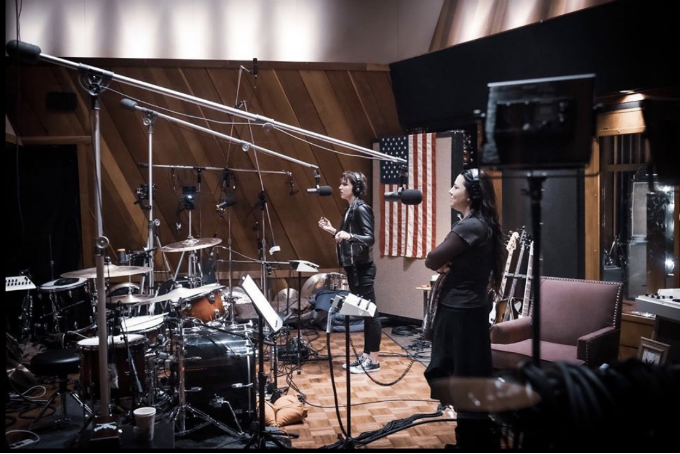 Nothing is more badass than two powerful women in rock singing together. Halestorm has been killing the rock charts for over ten years. Now the band has teamed up with another female powerhouse, Amy Lee of Evanescence. Amy joins Lzzy Hale on vocals for “Break In,” a studio version of a song the band played on tour in 2012. Furthermore, this single is one of a few songs that Halestorm is releasing in an entire Reimagined EP. The Philly area band is really starting off this EP with a bang, collaborating with one of the most recognizable voices in modern rock.

“Break In” is lyrically a powerful song. It’s about a strong connection with someone who sees the real you, even at your worst. You would do anything for that person to the point of recklessness sometimes. Halestorm songs always hit like a gut-punch of emotion. “Break In” feels more stripped-back than usual. And the addition of Amy Lee’s vocals only brings more raw intensity.

Musically, “Break In” is such a powerful and honestly beautiful collaboration. The vocals really carry this piece with only soft piano and string to back them. When Lzzy and Amy sing together, their voices blend smoothly. It’s strong, emotional and moving. Even at almost five minutes, we don’t want it to end. And compared to the version that was originally just played for live shows, this studio recording still manages to capture the magic of the song onstage.

So if you’re looking to cry and/or be inspired this week, definitely check out this dreamy and emotional duet. Nothing is cooler than women who rock, and Lzzy Hale and Amy Lee continue to reign. We would love to see these two tour together again or maybe even make more music together, because they clearly know how to slay. But until then, we’ll have Halestorm’s Reimagined EP to tide us over.