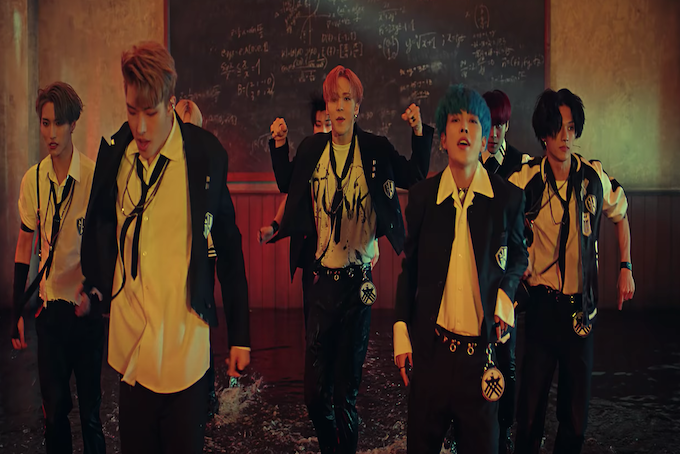 ATEEZ kicked off the year in full swing with the dramatic conclusion to their Treasure album series. The world tour to support their latest endeavors was unfortunately postponed due to the coronavirus pandemic. However, the octet is still poised for global domination with the release of their latest Zero: Fever Part.1 EP. The new era began as fans were once again asked to choose the lead single for Fever based off of performance and audio clips. It was between “Inception” and “Thanxx,” but “Inception” came out on top and was released as the title track.

“Inception” is classic ATEEZ — intense sonically and performance-wise. The boys are lovestruck and paint a vivid picture of what that feels like. “I’m dream in a dream every night // I’m in love,” they proclaim.

The music video is powerful. We witness fiery images and dream sequences as they try to sleep and wake up. And the impassioned choreography is also on full display.

Fever contains seven total tracks with rappers Hongjoong and Mingi credited as co-writers on the majority of the tracks.

The project kicks off with a spoken-word dialogue titled “Dear Diary: 2016.07.29.” The date corresponds with the date four years prior to the release of Fever. We hear the voice of a little girl as she offers words of wisdom relating to dreams, ambitions and growing up.

This transitions into the titular track “Fever,” which is a feel-good synth jam centered around youth. “Maybe we’re living younger // That’s why we’re fever,” they sing.

The dual-title track “Thanxx” is a trap-influenced hip-hop jam that will no doubt boost your confidence. It’s all about individuality and independence.

“To the Beat,” is the song you’ll be dancing to the rest of the summer. The whispering in the intro is something a little extra we all needed.

They continue to stress the importance of never giving up with the uplifting “Good Lil Boy.”

It comes to a fitting end with the soothing “One Day at a Time.” The song is sung entirely in English — a first for the band.

“Cause in life we sometimes need a helping hand // You’ll be alright // Just take it one day at a time,” Jongho sings.

It can be interpreted as an ode to the fans, as the group has built up a fervent international fanbase in the short time since they’ve been around.

Less than two years into their debut, the K-pop monster rookies have been working nonstop as this is their fifth EP and sixth album overall (not including Japanese releases). As a new era ushers in, ATEEZ have proven that their mass appeal is worth the hype. With a vibrant discography and diverse fanbase, the world is their stage.