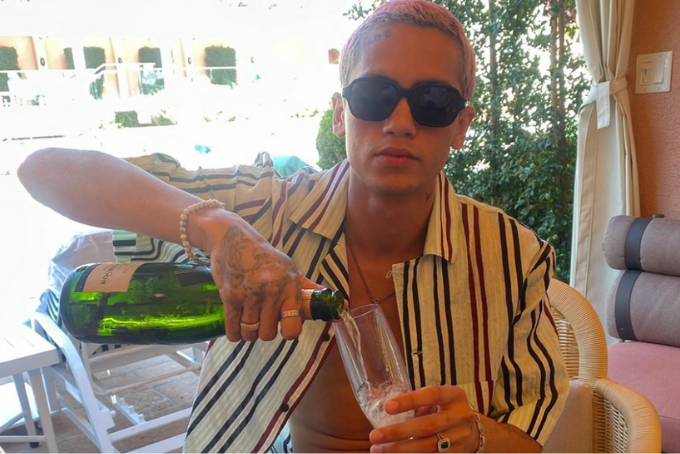 Dominic Fike has released his debut album What Could Possibly Go Wrong?, proving to the world that his creative talent is most definitely worth the hype. As the multi-faceted artist that he is, Fike flexes his strengths in this genre-fluid album — from rapping to singing, producing and shredding the guitar. After making a notable name for himself with the massive success of “3 Nights” from his 2018 EP Don’t Forget About Me, Demos, Fike returns with an even stronger sense of personality and maturity.

The album includes Fike’s two previously-released singles “Chicken Fingers” and “Politics & Violence.” However, there were a few setbacks affecting the projected release date of both leading singles and the album. As someone who has experienced police brutality firsthand, the tragic murder of George Floyd followed by the global call in support of the Black Lives Matter movement, Fike made the decision to delay the album release. More so, in his previous work, Fike cites his experiences with police brutality and growing up as a member of the BIPOC community.

Fike, who is Black and Filipino, shared his take on systemic racism and police brutality through a very direct Instagram post: “My life has felt cursed since I was a little kid. I’ve watched police, the supposed good guys, beat my mom and take her away. Aunts, Uncles. Shit, my dad just got 20. It’s like they had a problem with my family. I’ve since realized the real curse is the system we live in is designed for us to lose, again and again.”

Fike further elaborates on the details of his arrest. After being charged with battery of a police officer, the singer was put on house arrest, and eventually served eight months in jail. He explains how this experience has had a major impact on his life and career, writing: “The judge thought I was better off with this shit on my record. I’m lucky I could do music, since no one will ever hire me…. none of these [legal] decisions were based on trying to help us, they wanted us to disappear.” Possessing both sensitivity and empathy, Fike builds a strong, honest bond with long-time fans, as they have seen both his hardships and progress throughout his young career.

Blunty, Dominic Fike is holding absolutely nothing back on his debut record. Touching on concepts of love, sex, fame, politics and anxiety, fans are given the opportunity to explore the depths of Fike’s mysterious mind. He opens the album aggressively with the angsty track “Come Here,” which makes this debut hard to ignore. He teased the track in a recent 16-minute-long video promoting the album where he takes viewers along on his sky-diving adventure. Mid-sky dive, Fike begins casually singing the song as he free falls with his instructor. The daring visual matches the chaotic grunge-rock energy of “Come Here” perfectly.

Really hot that I’m strapped up like a fucking baby for 2 miles getting skyboned with a song from my new album playing in the back Y’all know what time it is. FIGHT OR FLIGHT full video on youtube

To highlight some of the more compelling tracks on the album, it is essential to unpack track No. 3, “Cancel Me.” In a nutshell, Fike exaggerates his own fears and anxiety related to fame and “cancel culture.” Contrary to the fear of cancel culture, Fike actually hopes that he will eventually be “canceled” so he can exist with his family incognito. The official music video premiered the same day as the album and was directed and shot by his little sister, Apollonia, and himself.

The rhetoric behind this video signifies Fike’s strong family values and confirms that he has always been reluctant to “blowing up” as an artist. Here, Fike reinforces that the motivation behind his career stems from taking care of his family, and confirms that he is disinterested in using his music as a way to gain notoriety.

Fike shared with Flaunt that family has always meant everything to him. Since obtaining his deal with Columbia Records, he has helped support his family financially. He wanted to “give my parents a proper shot at their court cases and give them another chance at life. They needed really expensive lawyers and I’m able to make sure everyone in my family has a house and food.” More recently, he bought his mother a house in Florida. Fike also has an apple tattoo beneath his right eye as a permanent tribute to Apollonia (also known as “Apple”).

Other notable tracks include the soulful and dainty interlude “10x Stronger” (which emphasizes Fike’s high-pitched vocals), the lead pop-heavy single “Chicken Fingers” and the romantic, yet nihilistic, “Politics & Violence.”

This album is sure to keep you on your toes as you try to keep up with its scatterbrained themes. Although there are moments where Fike has lyrically left some thoughts unfinished, the diversity of the tracklist is refreshing. Truly, each track embodies a different angle of Fike’s musical aesthetic.

What Could Possibly Go Wrong? marks a new era for Fike’s career, literally and metaphorically. Alongside the album release, Fike’s team has re-branded his image and dropped new merchandise. The entire merch line is centered around the symbol of an American ghost orchid — a flower native to the singer’s hometown of Naples, Florida.

According to National Geographic, the ghost orchid is one of the world’s most iconic flowers and is a super rare find. The florets don’t have chlorophyll and are therefore white in nature. When they move in the night, they resemble the silhouette of a ghost floating in the air (hence its name).

Perhaps Fike intentionally chose to present a ghost orchid at the forefront of his branding as a symbol reflecting himself. The flowers that remain in Florida have defied all odds and adapted to their challenging environment in order to thrive, similar to Fike, who is a die-hard when it comes to overcoming personal obstacles to reach his creative goals.