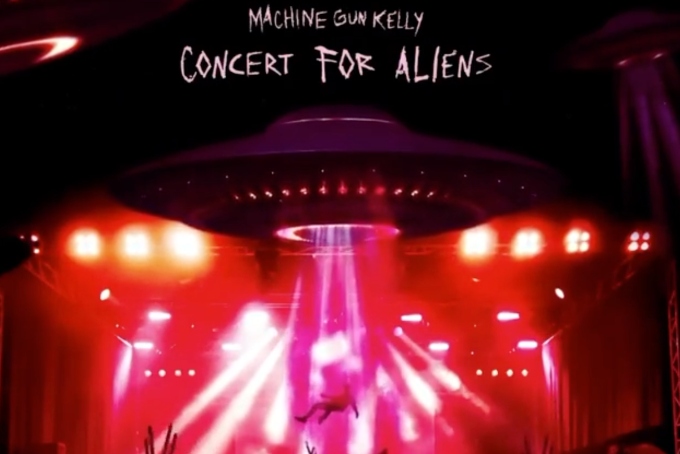 Okay, so it’s not exactly a surprise that Machine Gun Kelly is into Pop-Punk. After last year’s Hotel Diablo, the influence of that genre on MGK was clear. But an influence and a complete genre shift are two different things, and just because you like something, it doesn’t mean that you’re going to be good at it.

But MGK’s single “Concert for Aliens,” shows that our friend Colson has a few more tricks up his sleeve. (You know, aside from the acting, and the being on Catfish, and all those tricks.)

The opening chords on this song alone are enough to bring back a beautiful, pizza flavored wave of Pop-Punk nostalgia. Harkening back to the days of the mid-2000’s when Fuse TV was still cool, “Concert for Aliens” is the kind of song that you’d remember playing in a Hot Topic while you shopped for your back to school clothes, and would definitely make sure was loaded on your iPod Nano (yeah, remember those?).

It’s clearly influenced by the greats like Blink-182 (obviously), and New Found Glory, and while we’re sure that there are genre purists out there who are going to be mad that MGK has crossed over, we have to admit, the dude is… pretty good at it, and obviously knows his stuff. Alongside other Pop-Punk hits like “Bloody Valentine,” and a pretty impressive cover of Paramore’s “Misery Business,” Machine Gun Kelly is transitioning into a sound that most artists are trying to move away from by their fifth album.

And while it’s unlikely that he’s going to move away from the genre that made him famous forever, it’s still really cool to see that he does, actually have the range to produce two different sounds and still stay very MGK. Hopefully he’ll be able to keep both genres going, because he’s released solid music under both.

Overall, we’re super excited for Tickets to My Downfall, and everything that we’ve heard from it. We’ve already purchased our tickets, and can’t wait to hear the full album.