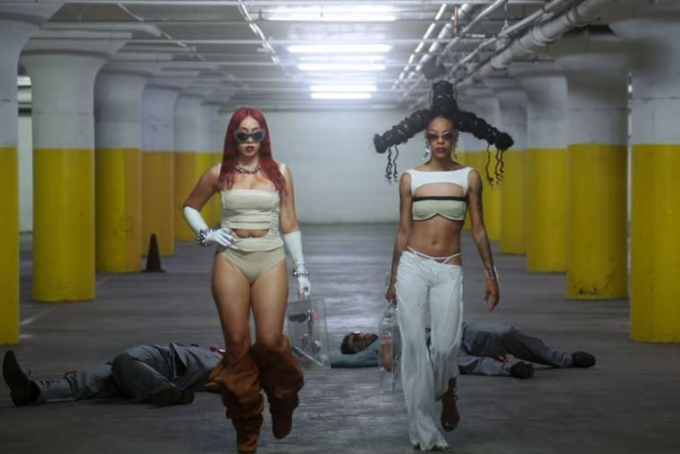 This week, Kali Uchis and Rico Nasty have blessed us with their first-ever collaboration, “Aquí Yo Mando.” The new single projects purely dominant female energy, leaving this duo unmatched.

Perhaps what makes this collaboration so satisfying is that Kali blends her saucy reggaeton-pop influence with Rico’s empowering rap, seamlessly. “Aquí Yo Mando” follows Kali’s recent surprise release, TO FEEL ALIVE EP. It appears that Kali dropped this four-track project to hold her fans over for during quarantine; however, fans still wonder when exactly Kali will drop a second album. After all, it has been over two years since her 2018 debut album Isolation.

Fans of Rico Nasty possess the same ambition as Uchis’ fans as they anticipate a rumored Rico Nasty debut album within the next year. Rico has a consistent record of dropping mixtapes, but we hope that an official album release is on the horizon. With similar respective fan bases, the decision to team up for this release is the ultimate power move for both artists — and we can’t help but wonder if there’s more to expect from these two in the near future.

A few days after the song release, Kali dropped the official music video. Directed by Phillipa Prince, the visual aesthetic embodies rich energy and abstract styling, as Kali and Rico play two criminals dripping in couture. The plot is cinematic and devious, which certainly promotes a stronger image of how badass this collaboration really is. The song itself was produced with the help of Tainy, Albert Hype, Jon Leone and Rvnes.

For long-time Uchis fans, it is essential to note that Kali is returning to her roots by revisiting her native language. The Colombian singer dabbled with singing in Spanish in the past, but “Aquí Yo Mando” is huge since the song is predominantly in Spanish. The last time we have seen Kali fully commit to singing in Spanish was in 2018 with songs like “Nuestro Planeta” (feat. Reykon) and “Tirano” (feat. Fuego). The Latinx portion of her fan base is ecstatic to watch Uchis take pride in her native tongue. The bottom line is that the bilingual switch up is super refreshing to hear. We can’t wait for what’s next on Kali’s upcoming sophomore album!