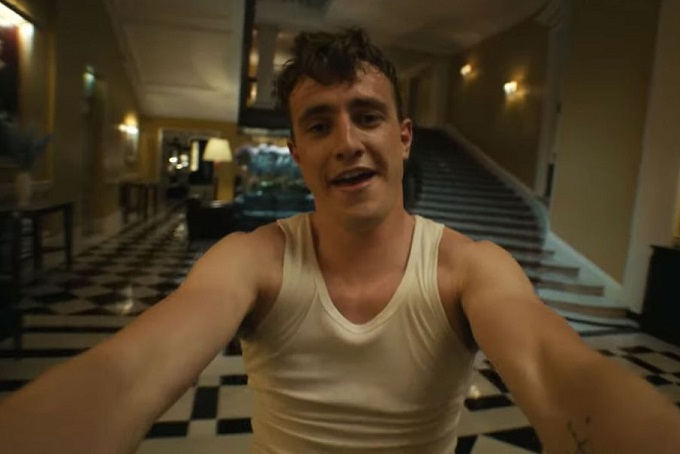 Is it hot in here or is it just us? The Rolling Stones’ new music video is certainly making it hard to tell. The video, which is for the band’s new track, “Scarlet,” stars none other than the heartthrob of the moment, Paul Mescal.

The video, which was shot entirely “socially-distanced” in the iconic Claridge’s hotel in London, opens with Mescal delivering a heartfelt message to a girl named Scarlet: “I’m a little bit drunk. I’m very sorry. I love you.” The Irish actor then dances his way wildly through the empty hotel, thrusting his hips, drinking whiskey and smoking as he goes.

“Scarlet” marks Mescal’s first music video appearance, which the star said was like going “off the deep end.” Speaking on a virtual Q&A before the video’s premiere, The Rolling Stones frontman Mick Jagger said, “I thought you were gonna kill yourself when you jumped down that stairwell.”

“So did I,” Mescal responded.

The song is a recently unearthed record from the 70s and features Led Zepplin’s Jimmy Page on the guitar. It is one of three previously unreleased tracks set for the forthcoming deluxe reissue of the band’s 1973 record, Goats Head Soup, set for a September 4 release date. The reissue will also feature a number of demos, new mixes, as well as a complete show from the band’s Goats Head Soup tour.

The new music video adds yet another highlight to an already brilliant breakout year for Paul Mescal. The Irish actor received worldwide critical acclaim and heartthrob status for his role as Connell in Hulu’s limited series, Normal People, in which he stars opposite Daisy Edgar-Jones. The series, which is based on the book of the same name by Irish author Sally Rooney, recently received four Primetime Emmy nominations, including Outstanding Lead Actor in a Limited Series for Mescal.