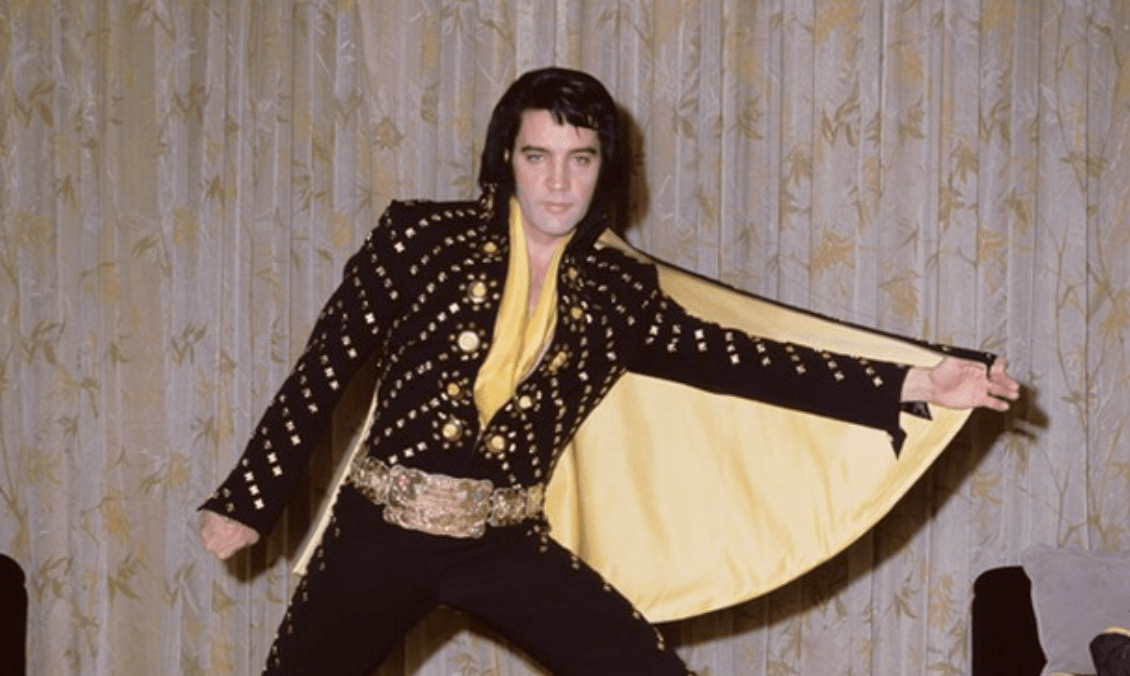 Elvis, the King of Rock and Roll, is forever immortalized in our minds as a young, good looking, hip-swinging guy dressed in a white jumpsuit. He passed away on August 16, 1977, in his home while using the restroom. If he was still alive today, he’d be 85, and probably still making all the ladies swoon — our grandmas included.

From the beginning of Elvis’s career, he set a new bar in music that garnered negative attention from parents and teachers. Despite the animosity, he remained revolutionary in the culture, earning the name “The King.” His fame and fortune continued with many roles in TV and film over the years.

Bill Belew designed the incredible white jumpsuits that we still associate with Elvis today, but have you noticed that most of his suits were white? ⁣. ⁣In an interview, Belew said that because lighting [in Las Vegas] was still in its early stages, the white color made Elvis stand out on stage and also allowed the stage managers to project colored lights on top of his outfit adding to the show’s theatrics. ⁣. ⁣#ElvisPresley #BillBelew #MensFashion #Jumpsuit #CostumeDesign #Elvis

Not only was Elvis a big star in entertainment, but he was also very patriotic. When the draft came, he was given the option to serve under special services — to entertain troops and live in priority housing. He declined and chose to serve as a solider, granting him great respect among the troops and those who resented him back home. Elvis served from 1958-60.

The Mississippi native is also known to have eaten some wild things. Let’s take a look at his famous, favorite dish: a peanut butter and banana sandwich, cooked in bacon grease. Daniel Clark, the food and beverage director at Graceland, demonstrates the traditional way of preparing this delight. If anyone knows how to make it how the King likes it, it’s him. In the video below, Clark explains the use of bacon grease as something Elvis’s mother would have kept throughout the day to cook with.

Step 1: Cut up the banana.
Step 2: Add peanut butter to the bread.
Step 3: Add the butter or bacon grease to a pan and heat.
Step 4: Add the banana slices to one side of the bread.
Step 5: Stack the other bread slice on and lay it in the pan.
Step 6: Grill the sandwich evenly on both sides until they are golden brown.
Step 7: Cut and enjoy!

Watch how to make Elvis's favorite peanut butter and banana sandwich in the #Graceland kitchen! Have you tried to recreate it? @visitgraceland

One thought on “King of Rock and Roll’s Favorite Food: A Peanut Butter and Banana Sandwich With a Twist”