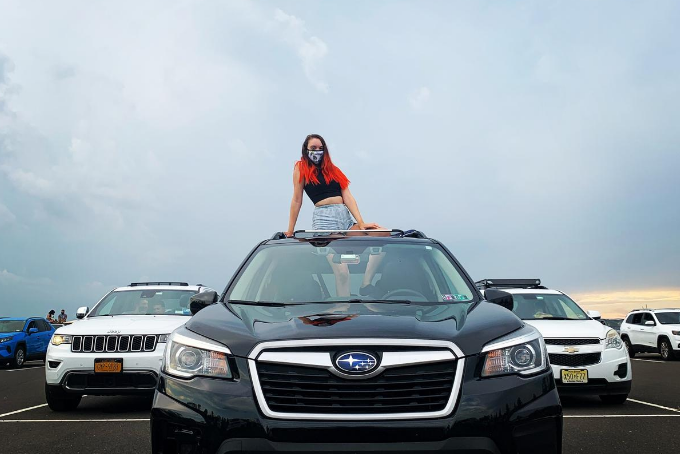 Could concerts from the comfort of your car be the new normal? This week I was lucky enough to go to two drive-in concerts because I was truly having live music withdraw. Sunday, August 23, was pop-punk band The Front Bottoms in Philadelphia. Next, on Monday, August 24, was piano god, Andrew McMahon, playing songs from all three of his projects in Monmouth Park, New Jersey.

The concept of watching a show from my car was weird at first. However, both nights ended up being magical — watching the sunset and singing songs with strangers again. Truly, the perfect 2020 mood booster. So if you were wondering how a drive-in concert works in 2020, I’m here to break it down for you.

Both shows had a stage setup in the parking lot with two front sections that required more expensive tickets to get into. Showing up, staff was extremely helpful directing everyone to spots and enforcing rules so that everyone felt safe. The Philadelphia show even had an added layer of security checking cars for weapons. Based on your section, spots were first-come, first-serve, with a space in between each car for social distancing. Those who showed up at the same time as friends in another car, they could park next to each other.

Concert goers were not allowed to leave their cars without a mask and only really left for the good old outdoor show porta potty. Everyone at the shows sat in their cars or on their car roofs. The real power move came from those who brought pickup trucks and set up chairs in their truck beds.

One of the worst parts of live shows is waiting in line for food and merch. So, it was good seeing that drive-in shows have really streamlined this process. In Philly, you ordered food and merch on your phone and they delivered it to your parking spot. At the Jersey venue, various golf carts rode through the rows of vehicles with merch, food and even Girl Scout cookies! Though, if you’re balling on a budget like my friends and I were, the best part is being able to bring your own food and drinks.

Sure, it was definitely different not being able to get super close to the stage, but it was also really nice knowing you weren’t standing on top of strangers. From sitting on my car roof, I had a pretty good view of the stage for both shows. Both venues were equipped with screens for those further back to see as if it were any other festival. In Philly, I was even able to get out of my car and dance a bit as long as I didn’t leave the parking spot.

For The Front Bottoms, the only “complaint” I would have is that the sound quality was not that loud. We were given a radio station to tune into to hear the show, but it wasn’t great and could have easily been fixed with more or better speakers. The stage was facing a beautiful sunset on a beautiful night. It was good to hear everyone singing from their literal car rooftops along with frontman Brian Sella. It even started to drizzle during their classic single, “Twin Size Mattress.” Overall, being able to drink and dance with friends again (safely and in a parking lot) made the experience one-of-a-kind.

For Andrew McMahon in the Wilderness, it was another beautiful night. The crowd was a bit smaller for this show, but Andrew brings out one of the most loyal fanbases. Monday’s show was celebrating 15 years of the Everything In Transit album. That album was made during Andrew’s time in his old musical project, Jack’s Mannequin. Although songs like “The Mixed Tape” were popular when featured One Tree Hill, the album continues to stand the test of time. Andrew was enthusiastically dancing on his piano and talking about the change he wants to see in our world. It would have been really difficult to not leave this show smiling.

For those wondering, each drive-in show costs approximately $200, and you can have up to four people in a single car. So for a full car, that’s similar pricing to a normal show for these artists. For those keeping their bubble small, it may be on the pricey side for two. Although, the savings on food and drink at a show can easily cancel that out.

For those who like to be up on the barricade or prefer all-day festivals, this might not be for you. However, if you are craving live music and want to share that love with close friends, family, or S/Os, I’d say the drive-in concert experience is for you. It cuts out all the annoying parts of shows like waiting in lines, crowds and trying to find a good view. If this is the new normal for now, we will take it! Who would you see live at the drive-in?