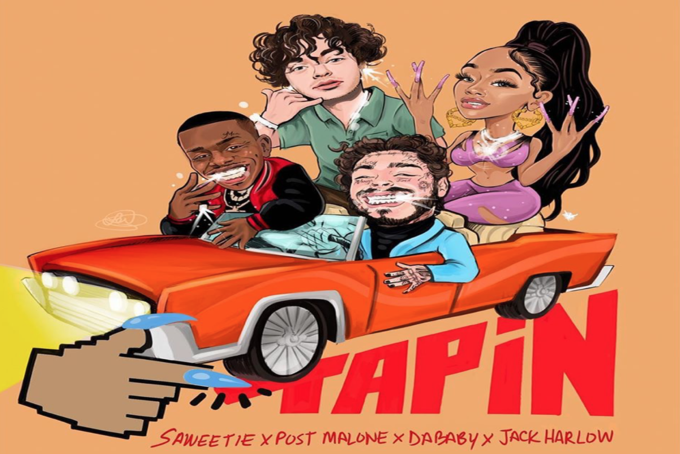 Saweetie just surprised fans with her infamous remix with 3 of the top rappers of 2020. DaBaby , Post Malone and Jack Harlow linked up with Saweetie to release a “Tap In” remix song. She hinted at a remix on August 26th but shortly announced its official release on August 28th on her instagram.

After much success of the original song, “Tap In” hit charts on both iTunes and Spotify. The reason for this success is all thanks to TikTok. The lyrics and dance moves, made by creators, helped rise the song to its success. Go ahead and watch Charli D’Amelio bust her dance moves to “Tap In”.

Tap Into The Rappers

All the rappers made sure to put their own personal spin to the song. For example, DaBaby raps about wanting a genuine girl who is sophisticated beyond looks. Soon later, Post Malone enters on his own beat. He is not shy to surprise fans since the whole verse in a different beat. His signature style of rapping definitely left a mark on the song. Last but not least, Jack Harlow finishes the amazing song. His recent success in the rap industry was due to his hit song “What’s Poppin”. “Tap In” marks his and DaBaby’s second collab, which makes us excited for more! Jack Harlow raps about his success mentioning that he reached the Top 40 and that he has more jewelry awaiting for him.

Do you want to hear this awesome remix and let us know your opinions about it? Listen to “Tap In” by Saweetie ft. DaBaby, Post Malone and Jack Harlow below and let us know how you feel about it in the comments.

2 thoughts on ““Tap In” with Saweetie, DaBaby, Post Malone and Jack Harlow”