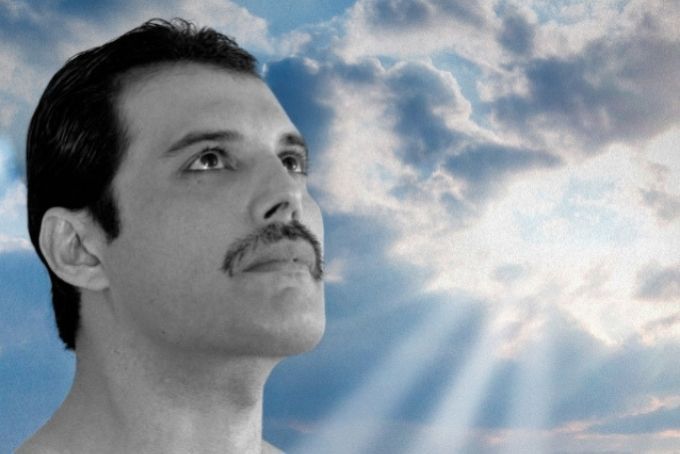 “Don’t stop me now,” proclaims the lead King of Queen, “‘Cuz I’m having a good time!” The late Freddie Mercury never disappointed a crowd and was always eager to make the band’s energy amplified. Their style of hype-pop and metal-rock was a fusion unlike any other of the 70s. In celebration of what would have been Mercury’s 74th birthday, we’re breaking down his career from start to end.

Freddie Mercury, Wembley Stadium 1986. “The fourth frame I shot during that show has become one of the most well-known rock photos in history. It’s a photograph I’m very proud of… and like all great photographs it will live forever” Neal Preston. 📚 Queen: The Neal Preston Photographs is available to pre-order from @reelartpress

Before Freddie Mercury rose to fame, he was born in Tanzania before immigrating to the U.K. with his family. The “Love of My Life” crooner spent his childhood experimenting with the piano. From the beginning, music was his saving grace, as his family was hesitant in his pursuit and encouraged more traditional careers.

After a few odd jobs while dreaming of making it big, he teamed up with guitarist Brian May, drummer Roger Taylor, and later, bassist John Deacon in 1971. Queen was born and not yet aware of the impact they would leave on rock n’ roll and the music industry as a whole.

Queen traveled from across the pond to the heavens of Hollywood, assembling songs together that would later become the soundtrack to many of our lives. “Bohemian Rhapsody” and “Killer Queen” emerged on the air waves to adoring fans, who couldn’t get enough of their sound. Mercury’s ability to deliver a powerful range caused an uproar and their stardom began. Later, the band would produce “Radio Gaga,” “Another One Bites The Dust,” “We Are The Champions” and more. The quartet also collaborated with David Bowie for their smash-hit “Under Pressure,” which never fails to life our spirits.

Along the journey, Freddie was linked to his sweetheart Mary Austin, who met at a gig prior to the fame. While on tour or in the recording studio, Mary stood by his side, supporting his talents. Eventually, Freddie had begun an affair with David Minns. Despite this, he always referred to Mary as his “soulmate”.

Throughout his career, Mercury performed an estimated 700 concerts in countries around the world with Queen. The music would hit a high note after the famous concert, Live Aid, in 1985. In efforts to assist citizens in impoverished cities in Africa, rock bands performed (with no commision!) to a sold out stadium. The show would be televised in London and Philadelphia, PA, and is considered one of the greatest concerts in the history of rock music! Mercury’s powerful, sustained note during the a cappella section came to be known as “The Note Heard Round the World”. In reviewing Live Aid in 2005, one critic wrote, “Those who compile lists of Great Rock Frontmen and award the top spots to Mick Jagger, Robert Plant, etc. all are guilty of a terrible oversight. Freddie, as evidenced by his Dionysian Live Aid performance, was easily the most godlike of them all.”

Freddie was taken too soon from us in November, 1991. The soulful rock singer lost his battle with AIDS, which he was diagnosed with in 1987. Although he is no longer with us, his music still leaves a powerful punch, and will become eternal!

To hear more of Freddie’s story, watch the movie “Bohemian Rhapsody”, which hit the big-screen in 2018! Rami Malek had a perfect depiction of how Mercury defined stereotypes and became one of the most beloved leaders in rock n’ roll!