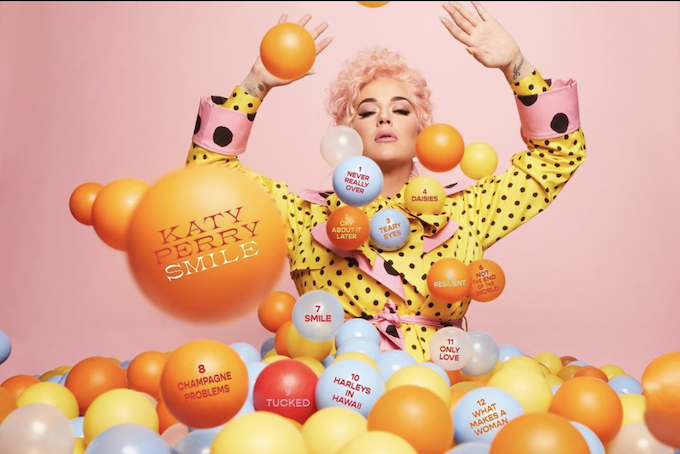 Katy Perry‘s sixth studio album Smile is everything — from production to lyrics you never knew you needed to hear. The album consists of 12 tracks, which include singles “Never Really Over,” “Daisies,” and “Harleys in Hawaii.”

IT’S HERE! IT’S REALLY HERE! 🙃 I finally got back my smile! Hope this record puts one on your face 🙂 #SMILE 🙂 IS OUT EVERYWHERE NOW! LOVE YOU GUYS SO MUCH ENJOY 🤡♥️ (sent from my hospital bed lol)

When it came to Smile, we didn’t have very many expectations. What were we supposed to assume the music was supposed to be focused around? Circus? Clowns? Self-love? It seemed like a never-ending list of possibilities, especially with the versatile singles that were released beforehand. After listening to the album, it has been decided that Perry can take on several different emotions all at once.

For instance, with “Cry About Later,” Perry brings pop production with lyrics about moving on and reflecting later. Later on in the album, “Champagne Problems” and “Not End of the World” take on a similar feeling that is shown in Perry’s earlier works, like Witness and Prism. Her bubblegum image resonates within Smile but slowly begins to disappear as her mature, mother-like figure tie the album off at the end. Tracks No. 11 and 12, “Only Love” and “What Makes A Woman,” reflect upon life and everything that has happened to Katy. From calling her mother to writing a letter to her dad to her just being herself.

I ♥️’d watching you all playing Katy’s Quest. We BEAT our fundraising goal for the weekend, but we are NOT. DONE. YET. We’ll be giving away☝🏼 more GRAND FINALE item live on @ExtraLife4Kids Donor Drive page: an autographed 💻 ‼️ Tune in to Twitch.tv/katyperry now to find out when it will be released and make sure to brush up on your SMILE lyrics 🤗 for more fun, games and a few cool giveaways in the chat!! 🙏🏼Thank you🙏🏼 to all of the amazing streamers who helped us meet our goal for @MusiCares and @ExtraLife4Kids—y’all are crazy and I ♥️ it!!! 🤪🤡

Let us know your top three songs that made you “smile” in the comments below!

One thought on “Katy Perry is Bubbly and Bright on Smile”