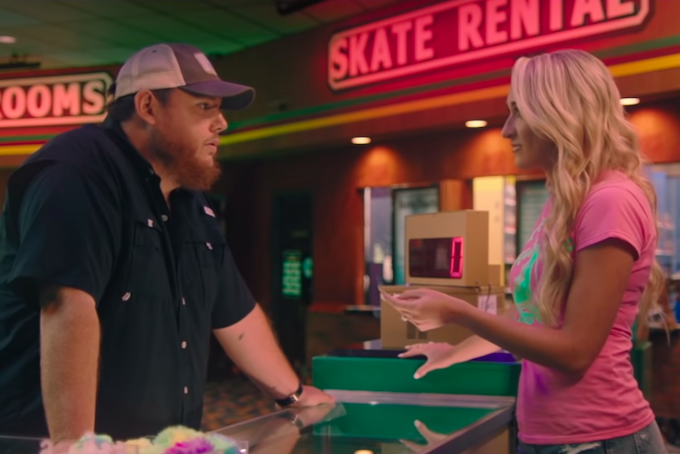 Country music star Luke Combs is back with his brand-new music video for his latest hit, “Lovin’ On You” and fans couldn’t be more excited! The music video is all about childhood fun and romance, which is sure to take you back in time to the good ol’ days.

While there have technically been two videos for “Lovin’ On You,” including an acoustic version and a lyric video, Combs was extremely excited to announce the official video — a fun childhood romance version, which has a special guest at the end.

”Lovin’ On You” is definitely the type of song that fans would expect a music video for, but the video that they’d expect from this song isn’t quite what Combs released. With the verbiage of the song, fans would expect the usual, a guy singing about a girl, but Combs transforms the song to a throwback worthy of a #tbt. The song follows a young Luke at his crush’s birthday party at the roller-rink. After several failed attempts of getting her attention, he notices her gawking at the pretty pink and white roller skates. After that, Luke decides he is going to do everything in his power to win those skates for his love interest (and spoiler alert, he does!) The love interest is of course, the special guest we mentioned earlier — fans can see Combs standing at the skating rink prize counter with a single ticket, and the woman at the counter is none other than Combs’ IRL wife in those pink and white skates. It’s the perfect ending for the creative throwback video!

“Lovin’ On You” is definitely a fan favorite and the new music video is definitely something fans will talk about for a while. Make sure to check out the new video with us!