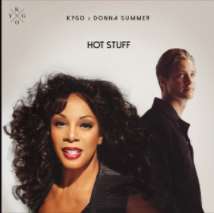 Norwegian DJ and producer Kygo is known for his high-profile collabs with current big name artists, but something you might not know is that he also likes to work with big names of the past. He just dropped a remix of “Hot Stuff,” the Donna Summer disco hit.

The remix does what every remix should do: takes the things that makes the song good, and then cranks it all the way to eleven. Kygo remains true to the structure of the original song, but adds modern synths, bass, and beats that make the song even more danceable. (Which, if we’re being honest, we weren’t even sure that was possible!)

This remix is something fans of both Kygo and Donna Summer will enjoy; it’s fresh, while still feeling like a Donna Summer song.

In a press release, Kygo said, “Donna Summer is one of my favorite artists of all time. Her catalogue of music is brilliant and her vocals are unmatched. I am honored and humbled to get to work on an iconic track like ‘Hot Stuff.’ This has always been one of those songs that instantly puts me in a good mood and I hope that this version can continue to bring joy and happiness to people who want to celebrate the legendary Donna Summer.”

Well, this song definitely leaves us in a good mood, so we’d say that whatever Kygo was going for, mission accomplished!

The remix was also released with a music video, starring Madelyn Cline and Chase Stokes, stars of the Netflix show Outer Banks.