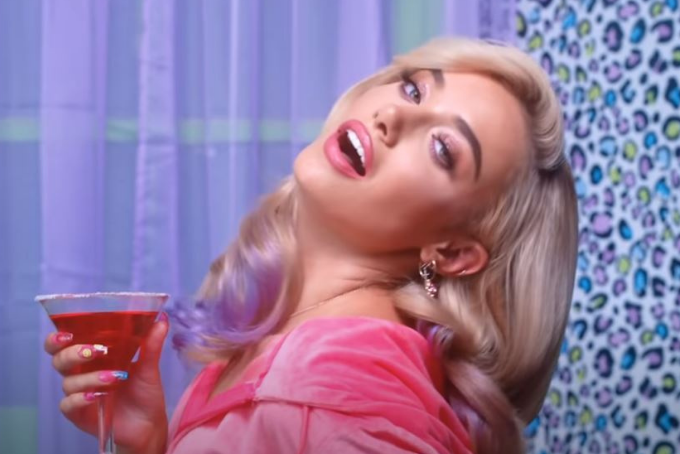 Olivia O’Brien has released her most notable music video to date, “Now,” where she pays homage to some of the most iconic trends of the early 2000s. “Now” follows behind the release of O’Brien’s micro-mixtape, The Results of My Poor Judgement, which dropped in February.

Since dropping that mini-project, her song “Josslyn” has gone viral within the TikTok community. While many expected “Josslyn” to be the peak of O’Brien’s career this year, she outdid herself again with “Now” — from the extremely catchy lyrics to its effervescent music video.

O’Brien is known for releasing breakup bops centered around themes of revenge, acceptance and self-reflection. “Now” adopts a strong message similar to “Josslyn,” shaming her love interest for blurring the boundaries of their relationship to justify being unfaithful. She opens singing, “I thought that you had something special// That kinda sh*t that give a girl a heart attack // We had so much potential // Until I started seeing all the things you lack.”

Based on the first impression, it’s very apparent that this new single interpolated Akon‘s 2008 single “Right Now (Na Na Na).” As an ode to the nostalgia of O’Brien’s childhood, she carefully copied Akon’s original cover art as well.

i know this is an old trend but hey guys here’s a hint as to what the song is like hehe (presave link in bio!!!)

In an effort to rebuild her aesthetic and brand, the 20-year-old grabs major style inspiration from the pop icons of her upbringing: Gwen Stefani, Britney Spears and Christina Aguilera. From Gwen’s pop-punk uniform to Christina’s signature blonde and black hairstreaks, O’Brien went as far as imitating Britney’s 2007 “I’m cutting off my hair and dueling with an umbrella” moment. To say the least, it’s very lighthearted and entertaining.

The pop star also pays homage to Disney, doing her best impression of the Disney Channel wand ID clips, except in this version she announces, “Hi, I’m Olivia O’Brien, and you need to move on!” She also pays tribute to Lizzie McGuire by rocking Hilary Duff‘s recognizable pink hairstyle and recreating her internal monologue as a cartoon character. If you pay close attention, Olivia’s cartoon character is wearing a denim dress while her ex is pictured in a matching tuxedo, similar to the look Britney Spears and Justin Timberlake served at the 2001 MTV Video Music Awards.

Merging newer pop culture trends with the past, O’Brien invited Call Her Daddy podcast host Alexandra Cooper to play a role in the plot. Cooper plays “the other woman” and is revealed wearing Paris Hilton‘s legendary sparkle dress that she wore for her 21st birthday party in 2002.

Within the past two years, Cooper’s sex-positive podcast has gone viral with over a million weekly listeners. Previously this summer, O’Brien was interviewed on Cooper’s podcast, in which the two discussed dating, manipulation and how O’Brien finds inspiration from her “situationships” to write hit songs.

Other notable faces featured in the video include O’Brien’s closest friends: Devon , Sydney Carlson, Nicole Rogers and singer-songwriter Drumaq (who doubles as Olivia’s LA roommate and opening act from the artist’s spring tour). The close-knit group of friends can be seen all over each other’s TikTok accounts and YouTube vlogs.

In the last scene of the video, O’Brien shades her ex in the wittiest yet dramatic way possible. As the camera pans into her face, she holds up a $1 bill that reads, “He’s not the 1.” She proceeds to rip the bill in half, signifying that “he” holds the cheapest value and is the most common to find, just like a $1 bill.

We can’t wait to see what Olivia has up her sleeve for her next project, plus we can’t get enough of her nostalgic 2000s aesthetic!