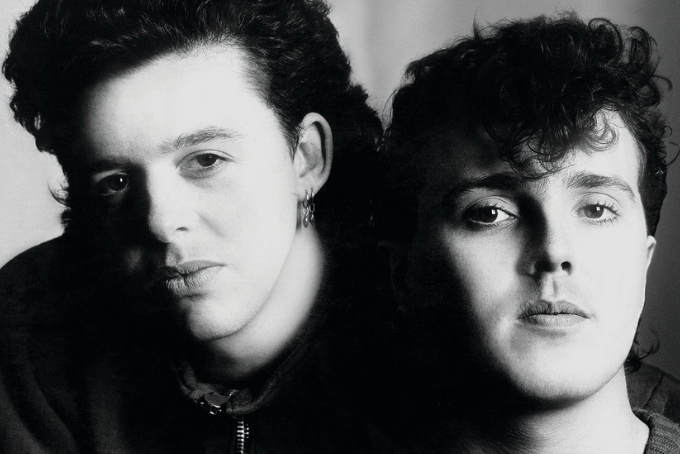 One note into any Tears for Fears song and you’re transported back to the 1980s. They’ve got this superpower of evoking the era and its emotions much better than most bands from that time. Even if they weren’t alive then, music fans get a taste of what of that transformative time was like thanks to Tears for Fears’ timeless music, some of which was featured in the cult classic Donnie Darko — albeit one rendition was a cover.

Ahead of their The Seeds of Love box set release on Friday, October 9, the band has released another gem from that period: a live version of their single “Standing on the Corner of the Third World.” It’s rare when a live version is better than the studio version, but that’s absolutely the case here.

The original version of “Standing on the Corner of the Third World” can be summed up in two words: sleepy and forgettable. For such a genius and influential band, it’s honestly a bit surprising that this track was earmarked as a single. However, if you get past the hypnotic music and hone in on the lyrics, it’s understandable why Tears for Fears promoted this track.

The lines are poetic and ahead of their time. In his deep-yet-falsetto voice, Curt Smith sings, “Standing on the corner of the third world // When we gonna learn? // Who we gonna turn to?” It’s a perfect sentiment for today’s chaotic state of affairs, but it’s also deeply personal to Smith.

“This was my primal therapy period, where I’d go off and have therapy and come back in a particularly open and emotional state. This song came out of that,” he explained in an interview for Rolling Stone. “I think it moves away from the interior world, to the awareness of politics but at the same time, identifying with the most vulnerable in the world.”

anyone else doing these social distancing picnics?

The music is smart, in the way it tries to evoke the ambiance of a poetry slam. We’ve got smooth jazzy synths, guitar and even decorative piano and wind chimes. It stays pretty much the same throughout, save for the introduction of an impressive women’s choir toward the halfway mark and a moment of silence toward the finale.

Typically, Tears for Fears’ music is evocative. They’re so well regarded because they get us to stop and think about our lives, the feelings we’re processing and how we fit into the grand scheme of things. This track has a lot of potential to do just that, but it doesn’t quite get there nor does it live up to their other work.

The live version, on the other hand, is not only profound, but it also nails the open mic vibe they attempted but didn’t quite achieve with the original.

It makes sense, considering the new-to-us nine-minute version was recorded live as part of their Townhouse Live Jam Session compilation. It’s a long track, to be sure, but it doesn’t feel long; instead, it’s raw and impactful.

The opening guitar riffs — which sound eerily similar to the start of “Jeremy” by Pearl Jam — mimic the feeling of the original track but bring it to a more exciting place. Where the original sounds like a somber lullaby, this live version is an emotional call to action. Smith sings his heart out, replacing the choir at one point and passionately interacting with his bandmates at another. The track also features more impressive musical interludes, including one at the four-minute marker with a harmonious near-duet between the piano and electric guitar.

This version throws a lot more at you, but it also gives you more moments to process what you’re hearing. Smith grabs your attention with his crooning, allows you to sit back and reflect with the instrumental stretches, and then brings you home with a smooth outro. Where the original fails to deliver a profound experience, this live version of “Standing on the Corner of the Third World” succeeds with flying colors.

To hear this formerly unreleased track, as well as Tears for Fears,’ other music, head over to their YouTube channel.