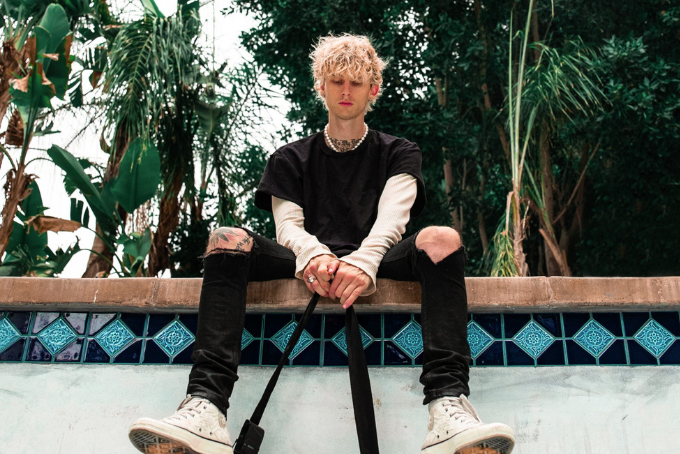 After much anticipation for its release Machine Gun Kelly‘s first pop-punk album, Tickets To My Downfall, is finally here and we’re ready to break it down for you all. The 30-year-old musician, born Colson Baker, decided to take a break from his rap career to branch out into other genres for his fifth studio album, proving to listeners that he’s a true punk rock kid at heart. With the help of collaborator and producer Travis Barker, MGK was able to reinvent himself from a rapper to a 2000s-sounding rockstar on this record.

The album kicks off with “Title Track,” which begins as an acoustic ballad as MGK sings, “I sold some tickets // To come see my downfall // It sold out in minutes // I saw friends in the front row,” but the song quickly transforms into a headbanger with an epic drum solo from Barker that completely sets the tone for the rest of the album’s duration.

From then, we are introduced to songs like “Kiss Kiss” and “Drunk Face” that both have a very nostalgic 2000s sound to them that will make you feel like you went back in time to when punk rock was at its peak.

The album also includes some great collaborations with artists like Halsey — who has also demonstrated her range as an artist over the years. She joined MGK on the angsty breakup song, “Forget Me Too.” Other collaborations include Trippie Redd on “All I Know”, Iann Dior on “Nothing Inside” and Blackbear on the hit song “My Ex’s Best Friend.”

Machine Gun Kelly was aware of the risk he was taking in making this pop-punk album, which is exactly why he named the project Tickets To My Downfall, but based on the reaction he is getting from the release, it seems like this album is anything but a downfall for his career. All we know is we definitely hope to see more rock albums in MGK’s future. Listen to Machine Gun Kelly’s highly anticipated pop-punk album, Tickets To My Downfall now!