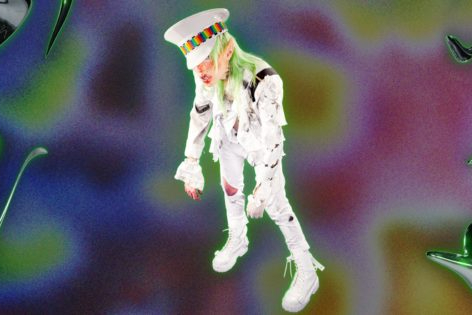 Experimental pop star Dorian Electra has done it again, this time with the help of queer icons Pussy Riot and Village People.

“My Agenda” is so a fun and eclectic that it’s easy to get wrapped up in the head-banging and forget the deeper meaning. When Dorian released the first songs from their new album, My Agenda, fans were blown away by its social commentary surrounding incels and the dark side of internet culture. This song follows in the same vein, exposing the myth of “The Gay Agenda” for the silly sham it is.

Known for their hot takes on gender and their unusual musical style, the artist has always been a controversial figure. Evidently, being unapologetically queer and open about your past as a stripper gets you a lot of buzz when you gain the sort of cult following Dorian has. Despite this, Dorian has always maintained a goofy and light-hearted attitude, filling their music with puns and ironic humor.

But Dorian truly snapped with this one. “My Agenda” feels darker and grittier than their previous work, while maintaining their signature style in other ways. Musically, it touches on many genres, including dark trap and dubstep. On the surface, the lyrics mirror this, as Dorian outlines their plot to instate a queer dictatorship. They make a reference to pride parades, sarcastically painting them as a marching army of insurrectionists. So, on a literal level, this song is the worst nightmare of anyone against the queer community. However, people who know Dorian’s work well would understand that they’re just trying to get people to think critically. By playing into the fears of the anti-LGBTQ+ people who inspire this song, they lay bare their own absurdity before them. Hopefully, this will reach some people and they will be shocked into seeing the truth — that queer people just want to live and be happy.

It’s clear that this is Dorian’s real agenda: to create a world where we can all live authentically, as they do.