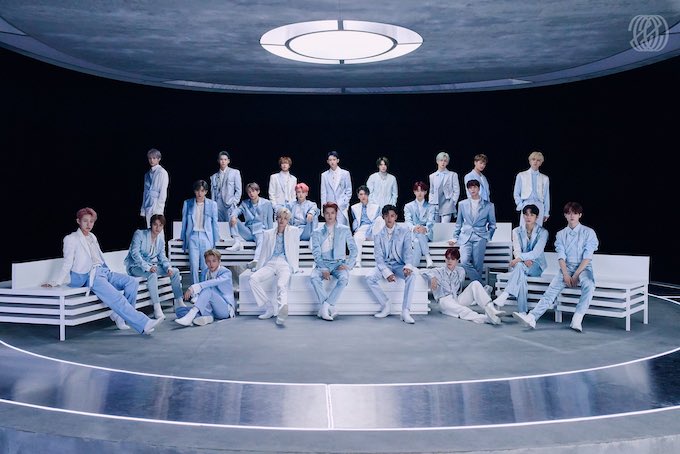 In 2018, 18 members of NCT came together to create the album NCT 2018 Empathy. Their most ambitious project is now back two years later as NCT 2020. With a whopping 23 members, they’ve released their second album, NCT Resonance Pt. 1. Part 2 is set to drop later in November.

NCT 2020 inducted WayV’s Xiaojun, Hendery and YangYang, as it is their first time promoting as NCT. They’ve also introduced brand new members Sungchan and Shotaro. With a total of 13 songs, 10 consist of units formed from all the members known as NCT U. The remaining three tracks are performed by NCT 127, NCT Dream and WayV respectively.

In the song’s vibrant music video, Shotaro catches our eye with his dancing. Additionally, Xiaojun’s vocals and center time steal the show. An English version appears as the last track on the album, and the lyrics are a little more playful if you have a sweet tooth.

The next track “Misfit” features NCT’s versatile line of rappers: Taeyong, Johnny, Mark, Hendery, Jeno, YangYang and new member Sungchan. The 90s hip-hop-inspired track has us all hyped with powerful rapping about breaking the mold.

Mark’s style and verses never disappoint along with Hendery as a major standout on this one. As it’s also the first time we’re hearing from Sungchang — with his verse, he impressively holds his own against his peers.

“Volcano” reunites the iconic “Boss” lineup from 2018 and although the new song gives off very similar vibes, it, unfortunately, doesn’t live up to its predecessor.

The highly anticipated “7dream” reunion takes form with “Déjà Vu.” The original seven members of NCT Dream have us reminiscing on the fun times when the guys were together.

“Music, Dance” from NCT 127 may have all the elements of your classic NCT 127 electronic dance track, but it doesn’t quite pack a punch like some of their other hits.

WayV’s “Nectar” is one of the best songs on the album. Sung in Chinese, of course, the passionate dreamscape laid out has us wanting a taste of this so-called sweet “Nectar.”

The R&B and hip-hop ballad, “Faded in My Last Song,” is a standout track. Taeil, Johnny, Lucas, Haechan, Renjun, Yuta, Jisung and Ten take this one. They might be performing their last song, but we definitely want an encore.

“From Home” is an emotional ballad featuring NCT’s powerful vocalists Taeil, Doyoung, Kun, Haechan, Yuta, Renjun and Chenle. The song is sung in English, Korean, Chinese and Japanese. A standalone Korean version was released as well. The lyrics layout NCT’s story as most have had to leave their homes (some to a new country), to chase their dreams of being entertainers, but only to find a new home within the group.

Despite the idea of all of NCT coming together and displaying their talents as a whole once again, Resonance Pt. 1 overall doesn’t make much of an impact. Even with a few exciting songs, we don’t anticipate have most of them on repeat after the initial listen. However, we’re hoping Pt. 2 lives up to more of our expectations, including a more balanced distribution of lines from each of the members.