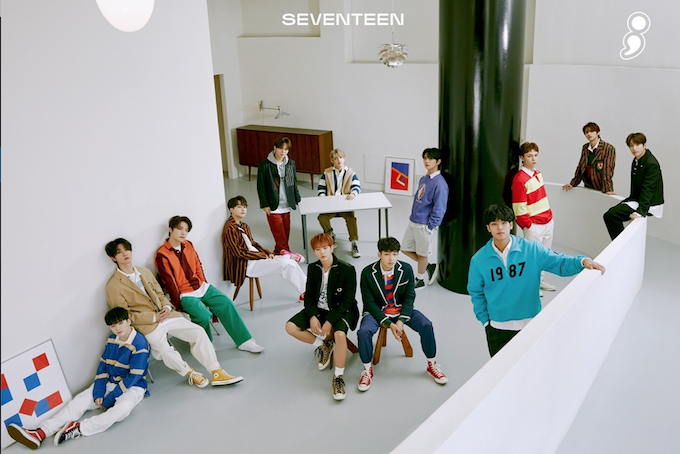 Carats, take a break and bask in the youth that is Seventeen’s newly-released special album ; [Semicolon]. If you enjoyed the uplifting and positive vibes of their last mini-album Heng:garæ, then ; [Semicolon] is another knock out of the park.

Following in the record-breaking footsteps of Heng:garæ, Semicolon has surpassed more than 1.1 million pre-sale orders.

Semicolon expands on the overarching theme of a “Journey of Youth,” from their last release with a fresh take: “Take a break and live in the youth!”

“Using the punctuation ‘Semicolon,’ we want this album to deliver a message of taking a moment for a brief breath to the young generation who run restlessly,” said Jeonghan of the unique album title in a press release.

All songs are crafted by the in-house team consisting of member Woozi, producers Bumzu and Prismfilter. Many of the members are also credited as co-lyricists.

The accompanying music video matches the retro feel as we see the members decked out in classy suits searching for a missing diamond. They search in various places as a pool bar, on a train, and in poker clubs. It’s nothing but fun and games and longtime fans can surely appreciate their dedication.

The feel-good, synth-pop track “Do Re Mi” is from the group’s youngest members Seungkwan, Vernon, and Dino.

The ‘96 line Jun, Wonwoo, Woozi, and Hoshi deliver latin-flair with “Light a Flame.”

Next, we have the ‘95 line Jeonghan, S.Coups, and Joshua with the smooth and romantic “AH! LOVE.”

Finally, “All My Love,” is a heartwarming closer, as it’s dedicated to a special person that’s always by your side.

Five years strong, the self-producing idol group is still as youthful as they were in their debut days. With Semicolon, they have once again managed to deliver a versatile and meaningful project to reflect their maturity as a group.

; [SEMICOLON] is available on all major streaming platforms.