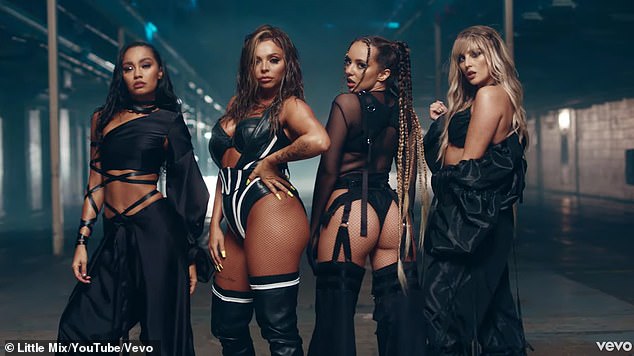 Little Mix is bringing the heat (and possibly taking aim at their exes) with their new single “Sweet Melody.” The song is the third single off the group’s much anticipated sixth album, Confetti, which is set to release on November 6. It was co-written with Ariana Grande’s collaborator Tayla Parx as well as the group’s frequent collaborator MNEK, so it was destined to be a smash from the jump.

Jade starts off the song, singing “In a whole other life, there was this boy that I knew // He made me feel like a woman, we were young and silly fools // Anyway, he was in a band // Wrote love songs about me // I wasn’t crazy ’bout the words, but the melodies were sweet.” The guy (or guys) in question were clearly musicians, which certainly had fans speculating whether or not the song was referring to some of the girls’ famous exes (we’ll get to that in a minute.)

“Every time we go dancing, I see his straying eyes // Gave him too many chances, push my gears too many times // Anyway, he start acting dumb, then I’ll be on my way to leave // But I stopped in the tracks when I heard this melody” Jesy continues, seeming to refer to a romance that wasn’t so “sweet” but actually rather stressful. Being in love with someone that you KNOW is unfaithful, but falling for the sweet talk and lies anyway seems to be a common theme throughout this track.

“He would lie, he would cheat, over syncopated beats // I was just his tiny dancer, he had control over my feet // That’s when he came along, that’s when I lost the groove // There was no song in the world to sing along or make me move” Perrie sings in the final verse, further solidifying the point that whoever this guy was, he was a great liar and had a lot of control over her.

With lyrics like this, it’s no wonder some fans are speculating that the song is taking aim at some of their exes. Years ago, Perrie famously dated Zayn Malik of One Direction, while Jade dated The Struts star Jed Elliot. Jesy also dated Rixton singer Jake Roche. Although most of these relationships ended years ago, the theme of musicians, cheating and “sweet melodies” seems to point in that direction for some fans. Other fans are opposed to the speculation, stating that (in reference to Perrie and Zayn’s relationship specifically) “They broke up five years ago, move on.”

The video features the girls serving major looks and showing off their fierce dance moves in what appears to be an abandoned warehouse. It certainly doesn’t disappoint. Check out the steamy video for “Sweet Melody” here: