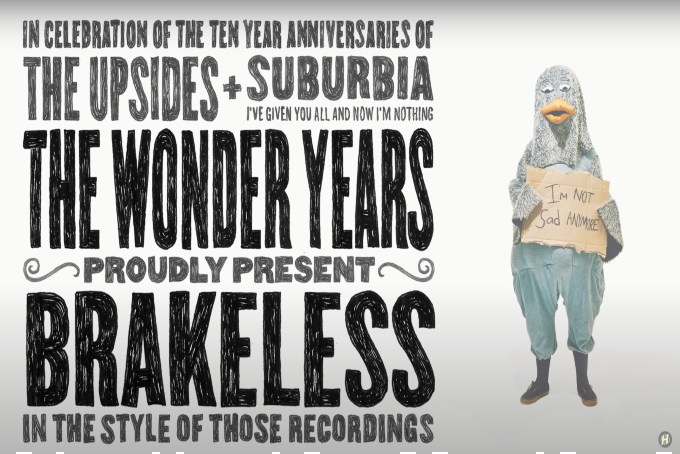 The second best reward for participating in your democracy is definitely a new The Wonder Years song. Philly’s favorite pop-punk legends are celebrating 10 years of their second and third albums by inspiring fans to vote. The band’s fans are so active that they got 1000 voters to take action in just a few short weeks.

To thank the fans, The Wonder Years released, “Brakeless,” a 2010-inspired, catchy new single. Using lyrics that singer Dan Campbell wrote in 2008, the six-piece group crafted a current song inspired by words from their past.

Tonight at midnight, we’re releasing a song we hadn’t planned to release until December. If you’ll indulge us, we’d like to tell you a little about it. “Brakeless” is one of two new songs we recorded over the summer. We were thinking about ways to celebrate the ten year anniversaries of The Upsides and Suburbia. The two records were released a year apart and, maybe, from the outside, they feel like different eras of the band but internally, it was one long, sleep-deprived blur of rest stop bathrooms, walmart parking lots, airport floors and dirty green rooms. To us, the two records are forever intertwined and needed to be celebrated together. In a deep-dive through an old hard drive, I (Dan) stumbled onto a voice-note demo dated during the writing of Suburbia. It was a song I never showed the band because I didn’t feel like it had a place on the record and the idea struck me to try to go back in time and turn it into a full song. And then we thought, “If we’re going to do a new song in the style of Suburbia, then we should do one in the style of Upsides as well.” So we did. We went back and dug through old-unused ideas from the era. We reread journals and sifted through memories and we wrote two new songs that we feel would be at home on those records and we got the team back together to do it. Steve Evetts who produced and mixed Suburbia produced these songs and Vince Ratti who produced and mixed Upsides mixed them. Because of the pandemic, Steve produced remotely from California via technology that is way above my pay-grade and so our live engineer, Andy Clarke, engineered for us in person at Retro City Studios in Philadelphia. Now, like we said, this song wasn’t going to come out for another two months. We challenged y’all to register to vote, check your status and request your mail-in ballot and you showed up in numbers to do that; so we’re keeping our end of the bargain and putting it out now. All that really means is that you should keep your eyes peeled, because there’s more to come and we’re really excited to show you all of what we’ve been working on. 📸: @kellymason

“Brakeless” is beautiful in the way that it brings The Wonder Years’ classic style of their early days to the forefront and flawlessly blends it into their current sound. Despite the lyrics being written many years ago, a lot of the words still ring true. The chorus sings, “I heard a song on the radio // That tried to tell me I’m not alone, // But I feel like it today.” Oddly enough, it very much represents the isolating feeling of 2020.

Despite the hopelessness, The Wonder Years always tend to sneak in a message of hope. If Dan could get through that tough time in 2008 and be a front-runner in his scene today, we can get through whatever we are struggling with.

Musically, “Brakeless” has the fervent intensity in its drums and guitars reminiscent of The Upsides and Suburbia. However, through the smoother production and vocals, listeners can hear the Philly band’s growth.

So, if you haven’t checked out “Brakeless” yet, it’s a must for new and old The Wonder Years fans alike. Not only is the song a great way to commemorate classic pop-punk albums, but it’s also inspired people to vote.

A second single in the style of The Upsides and Suburbia I’ve Given You All and Now I’m Nothing is hopefully coming soon. If it’s anything like what the boys did with “Brakeless,” it’s sure to be a relatable masterpiece. Until then, we have a little bit of music-induced hope to get us through the rest of the year.