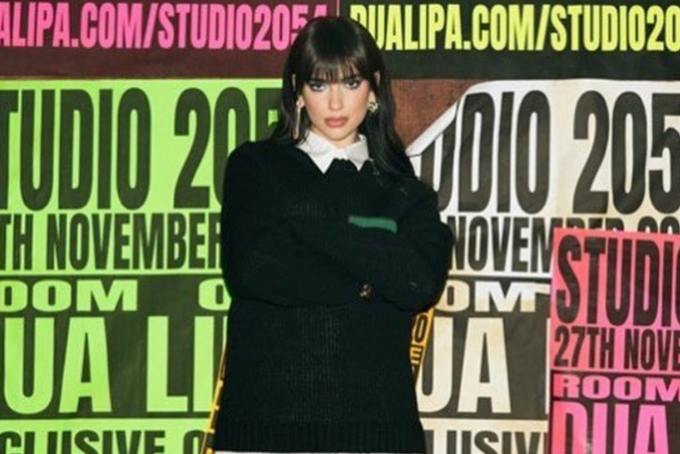 Dua Lipa reveals she’s in the works of putting on a special concert experience dubbed Studio 2054, featuring “music, mayhem, performance, theatre, dance and much more,” according to the official press announcement. Its purpose is to blur the lines of fantasy and reality to create a mind-blowing fusion that delivers a new edge to the live music experience.

Taking place on Friday, November 27, via LiveNow.com, the virtual concert is attached to the American Express “Unstaged” series. The show will be broadcasted internationally in four separate streams.

The show is said to take place in a warehouse in which Lipa revealed Studio 2054 will come to life as she throws theatrics while moving through custom-built sets, surreal tv skits, roller discos, trash-pop hangs, voguing ballrooms and diva-style dressing rooms. The announcement for the event also shares that Lipa will be surrounded by a star-studded cast of musicians, dancers, aerialists, acrobats and guest appearances from stars themselves.

This show follows behind Billie Eilish’s Where Do We Go? The Livestream that the “When the Party’s Over” singer delivered just last week. It was also a paid event that featured a plethora of video graphics, surrealist visuals and engaging fan participation. It seemed to set the bar for virtual concerts going forward for musicians everywhere.

General tickets are priced at a safe $11.99 and went on sale for a limited time, beginning Friday, October 30, at 8:00 a.m. GMT onward. There are also bundle tickets that sit pretty at $27.50 that grant fans access to exclusive pre-show footage of Lipa behind the scenes and an invitation to the virtual afterparty where fans will see the diva and multiple guest DJs performing sets.

Listed below are the four different stream times for the show’s November 27 performance across global territories: