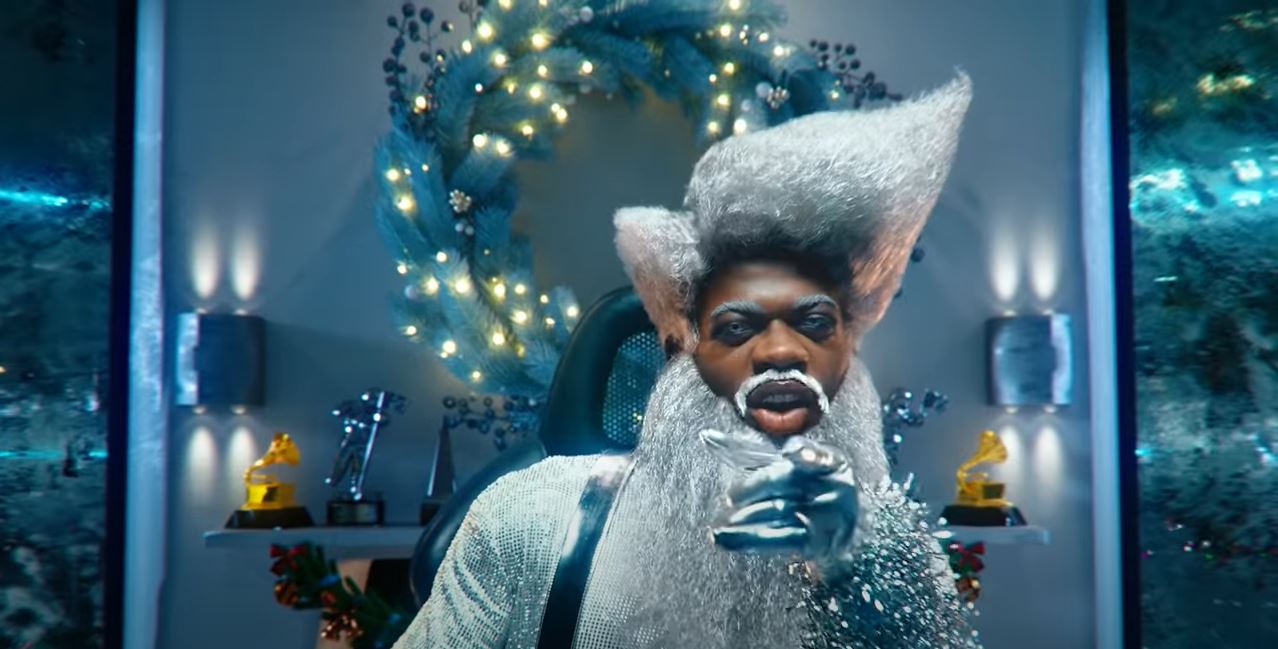 If there’s one takeaway from Lil Nas X’s “Holiday” video, it’s this: There’s a new Santa in town, and he’s fly as hell. It’s been a hot minute since his viral single “Old Town Road” was in regular rotation at clubs, sporting events, bars and, well, pretty much everywhere, but now the rapper/singer is back with a new diss track disguised as a holiday song. “Holiday” takes shots at his haters and an industry that’s tried to curtail his success, and its video is a fun romp through a futuristic North Pole that’s complete with robots, high-tech electronics and Lil Nas X in impeccable makeup and show-stopping costumes. In short, come for the song and stay for the amazing cinematography.

“Holiday” feels like what we’d get if 1994’s “The Santa Clause” was reimagined in the “Star Wars” universe. Its North Pole has Santa and his elves, of course, but the whole operation is seriously streamlined. There’s a wing for departures, conveyor belts for all the goodies, and everyone on the premises just looks cool. When we say everyone, we really mean Lil Nas X. He stars as Santa as well as all of the rhythmic elves, who can bust a move just as well as they can wrap a present. When Lil Nas X first enters the screen, it’ll definitely leave you speechless. He’s Santa alright, but he’s not the jolly old man we’re used to seeing: This Santa is slim, stylish and, as much as it pains us to admit it, sexy.

We’re not hesitant to call out sexy when we see it, but it’s hard to pay him that compliment when his song includes eye-rolling lyrics on the matter, including: “I’m sexy // they wanna sex me.” He’s clearly feeling himself, but this lyric comes off as a display of false confidence. It’s reminiscent of the little pep talks we all give ourselves before an important job interview or meeting —  words that are meant for us and only us. We’ll give Lil Nas X a pass here, though, because the song is so good and he does, honestly, look incredible. Whether he’s joyfully dancing through a tunnel as Santa in head-to-toe silver or leading a troupe of elves in a sick dance, Lil Nas X commands your attention and looks amazing in doing so. He’s got a face for makeup, that’s for sure, and he’s compelling in every “Holiday” role he takes on. It makes you wonder: Should Lil Nas X consider a career in film? Surely the Marvel universe has a place for someone who’s so versatile and charismatic on-screen.

We won’t sugarcoat it: The video for “Holiday” is fantastic. It’s flashy, fun and fashionable. The song itself is also incredible. It’s the dubstep holiday anthem we didn’t know we wanted but are sure glad to have. In a year that’s been so tough, this song is a more-than-welcome gift of escapism. It transports you to the days when high-budget music videos were the norm, and it’s a serious departure from today’s fast-and-largely-forgettable content. At times, its lyrics are eye roll worthy and some scenes are clearly product placements for the forthcoming PS5, but “Holiday” is so much fun that we’re willing to forgive all of the aforementioned strikes. And you can’t help but respect Lil Nas X for working subtle digs into such a catchy pop song. “Man, I snuck into the game, came in on a horse // I pulled a gimmick, I admit it, I got no remorse // Nobody tried to let me in, nobody opened doors // I kicked them motherf*****s down, they didn’t have a choice.” Is he bitter? Yeah, probably. Is the song genius? Absolutely.

If you’re looking for a fun song about Lil Nas X rounding up his “hoes” for a Christmas like no other, look no further than “Holiday.” Seriously, though, this track is one that’ll definitely put a smile on your face and its video is too good not to watch at least once. Feast your eyes on “Holiday” above and check out all of Lil Nas X’s other goodies at his official YouTube page.