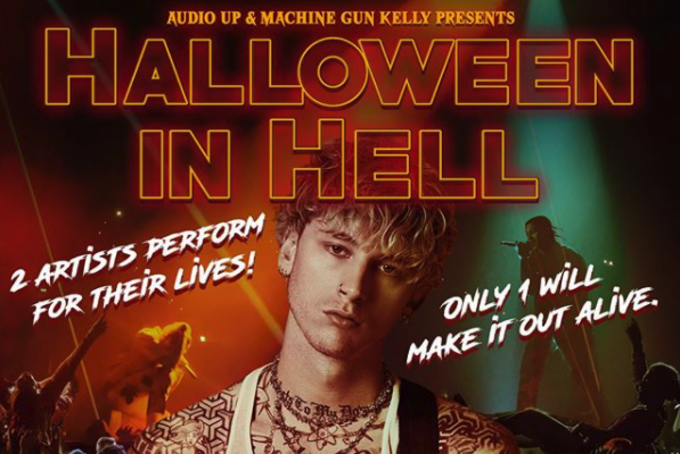 2020 is all about innovation and creativity. As a large portion of the entertainment industry has been shut down due to the inability to tour, many artists are looking to diversify their careers and Machine Gun Kelly is ready to take those risks.

This year has seen the rise in podcasts with everyone and their grandmother creating one about an assortment of topics. However, one thing we haven’t seen a lot of is a storytelling musical podcast. That’s not to say that we haven’t seen fictional work done in podcast form, (one of the most popular ones being the Cole Sprouse produced Borrasca) but the blend of music and story has yet to be captured via the airwaves. However, not one to deny themselves a new opportunity, Machine Gun Kelly, 24kGolden, Tommy Lee, and others added their voices and music to a new musical podcast: Halloween in Hell.

The podcast follows three performers as they are lured to hell where they are subsequently trapped and forced to perform, with the winner allowed to return to Earth. (The other two must perform in hell for eternity.) The four-part series features Tommy Lee as the Devil and Machine Gun Kelly, 24kGolden, and Dana Dentata as the unlucky performers. Upon being dragged to hell, they must battle their way to freedom featuring new songs sung by the artists accompanying the journey. The music does a fantastic job of setting the mood for the scene, allowing the listener to generate a mental image of what is happening even without a visual, and one song that captures the mood perfectly is “Climb.”

“Climb” is the final song in the podcast that follows Ian Dior, 24KGolden, MGK, and Dana rushing to find the portal to get them out of Hell after escaping the Devil’s studio. As the four rush to escape, the music begins to swell with 24kGolden singing “Can we make it out of here? // Can we make it out alive? // Can we Climb, Climb, Climb?” The song continues on with an overwhelming sense of positivity and camaraderie, two traits that are exemplified as the characters speak in between breaks of the song as they make their way to the finish line. Going beyond the symbolic lyrics is the background music itself, interspersed with strings and crashing drums that are both climatic and imagery heavy, giving the feeling of a final battle that is turning in the protagonist’s favor. As the escapes go through the portal to freedom, “Climb” peters out with strings as newscasters tell of the four escapes causing confusion on their spontaneous appearance in an Ikea. It’s the perfect song to end a truly fascinating piece of media, and surely one of the most fitting songs for Halloween in Hell.

Following the success of the podcast, Audio Up released a complete collection of all the songs featured in the podcast including “Climb.” Both the podcast and song can be streamed anywhere and although Halloween has come and gone, this musical is a testament to a new wave of media, and Halloween in Hell proves its worth.

One thought on “Machine Gun Kelly, 24KGolden, and Tommy Lee “Climb” To Freedom in New Single”