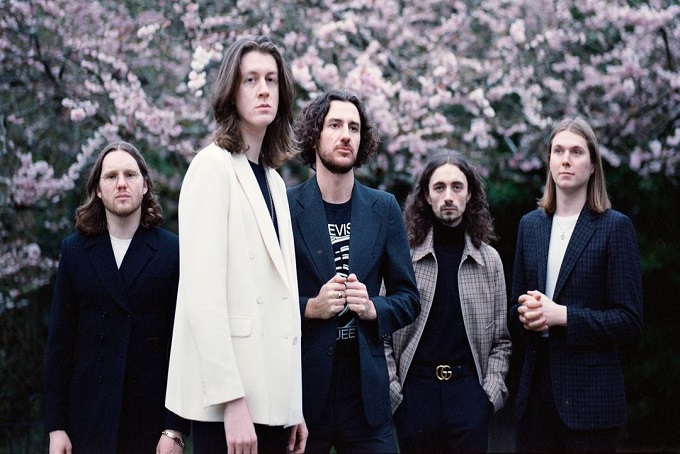 Undoubtedly, 2020 has been a difficult year for almost everyone, but musically, it has been an amazing year full of work for Blossoms. The non-stopping band continues surprising us every day. In January, they released their third studio album, Foolish Loving Spaces, and in October, they released their double album Blossoms In Isolation / Live From The Plaza Theatre, Stockport. But these are not the only surprises they have left. Blossoms know that Christmas is coming, so they have filled their fans with gifts. Keep reading to find out about their two new Christmas songs, their documentary, and their upcoming live show!

Our brand new double A side release ‘Christmas Eve (Soul Purpose)’ / ’It’s Going To Be A Cold Winter’ is out now! Featuring the Stockport Junior Voices choir, you can listen, download & pre-order a very limited edition 7” vinyl version now from 👉https://t.co/qa90PnuDEF pic.twitter.com/gvAGuJ6kaz

On the other hand, “It’s Going to Be a Cold Winter” is as lively as “Christmas Eve (Soul Purpose),” but the juxtaposition of the lyrics “There’ll be no rejoicing at this rate // Where’s the end of this Sellotape? // As the needles drop // Is there a present you forgot?” perfectly capture the stress that some people carry during the holiday season. In the track, produced by Blossoms themselves, the bells are worthy of a memorable Christmas song. Certainly, the band created two songs that will stay forever in our minds, and they basically win Christmas!

The second gift that the band gave to their fans, and also a great step in Blossoms’ career, is the release of their documentary Blossoms: Back to Stockport. Directed by the band’s long-time collaborator Charlie Watts, it premiered on YouTube on November 7, and it is now available on Amazon Prime. The documentary focuses on Blossoms’ homecoming show at Edgeley Park in Stockport last year, and it also features interviews, behind the scenes, and unseen archive footage of the band.

Watts stated that “to be able to make a film about them playing to a sold-out show in our home town of Stockport was something I’ll never forget… the film gives an intimate insight into the amazing bond and togetherness this band has. They grew up as best friends and it really does show on the screen.” Furthermore, the band added: “We’ve worked with Charlie on and off since the band started…, so when the opportunity to make something together surrounding the homecoming show in Stockport came about, we jumped at the chance… We think he’s really captured the spirit of the band and, being a friend, he was able to get the natural moments you don’t normally see in a band documentary. We love the film and hope you do too!”

Definitely, Blossoms: Back to Stockport shows viewers the musicians’ down to earth nature and their love for their hometown. We can see the beautiful relationship between bassist Charlie Salt and his grandfather, as well as the band returning to drummer Joe Donovan’s old job to get their tailored suits for the big show at Edgeley Park. In addition, Blossoms: Back to Stockport will make you fall in love with Stockport as much as Blossoms are in love with it!

The documentary is also a source of inspiration for anyone who wants to follow their dreams as we see old videos of Blossoms performing in small venues before becoming a household name. Frontman Tom Ogden tells the audience at the show: “funny story: last time me and Joe were here, 10 years ago to this month, we had our prom in that building over there. In our little suits and a f**king limo. 10 years later and we’re stood in front of you beautiful people.” If that does not serve as motivation, I do not know what will.

Last but not least, Blossoms recently announced that they will perform a once-in-a-lifetime live show at the O2 Academy in Brixton, London. The band stated: “We’re delighted to announce that we’ll be playing a very special 360° interactive Melody Virtual show live and direct from London O2 Academy Brixton on Thursday 3rd December! We can’t wait to perform for you all at home.” Tickets for the show are available at the Ticketmaster website.

According to a press release, “the unmissable show will be packed with indie hits including ‘Charlemagne’, ‘I Can’t Stand It’ and ‘Your Girlfriend,’ performed on the hallowed London stage. Join this one-off event via the MelodyVR app on smartphones and VR headsets, and get ready to virtually join the band on stage, choose from multiple camera angles, and grab a 360° view of the action.” We absolutely don’t want to miss this show!

We couldn’t be prouder of Blossoms and all the things they have achieved this year, and we are more than excited to see what they have in store for years to come. In the meantime, remember to stream “Christmas Eve (Soul Purpose)” and “It’s Going to Be a Cold Winter” on Spotify and Apple Music, and don’t forget to pre-order the double-single vinyl at Blossom’s official website. Also, you can watch the visualizer for “Christmas Eve (Soul Purpose)” below.