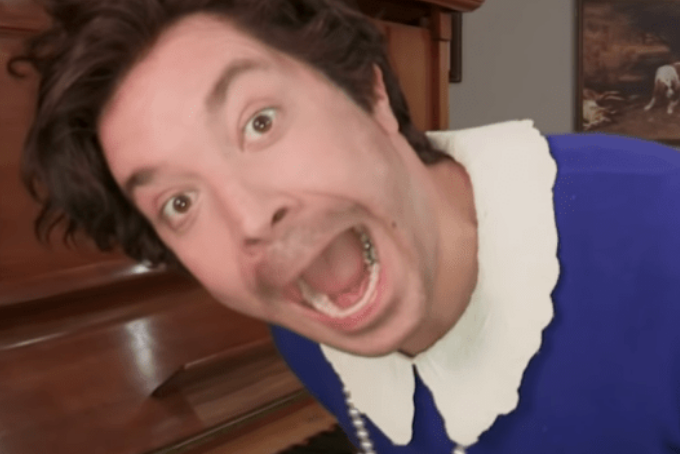 After the announcement of his internet-shattering Vogue magazine cover debut, Harry Styles fans have been anticipating the release of an official 73 Questions with Vogue interview.

Well… they finally got what they asked for — kind of.

With no official interview in sight, late-night host Jimmy Fallon stepped in to do God’s work, channeling the young rockstar during last Wednesday’s episode of The Tonight Show. Fallon gave a spot-on impression, answering questions with very philosophical responses and a mellow tone.

Rocking an exact replica of the Gucci outfit Styles wore to a SiriusXM interview earlier this year, Fallon had fans cracking up. In fact, the resemblance was so uncanny that some viewers had to do a double-take when comparing the two.

The 3-minute long video consisted of Styles (Fallon) in a dressing room, doing everything from playing the piano and guitar (from Guitar Center) to drinking tea (with ‘VODKA!!’). It concluded with him closing the door and reminding people to “treat people with kindness.”

Many fans have accepted that this is the closest they’ll get to a real 73 Questions interview with Harry. The star is notorious for beating around the bush when asked literally anything.

To be honest, it’s tough to say that he has ever actually answered a question during an interview over his entire career. This tweet sums it up perfectly:

We don’t know if Vogue and real Harry have anything up their sleeves for us in the coming weeks, but regardless, this parody was just what we all needed to get through the week.

While we’re all waiting on the real deal, remember to check out the December issue of Vogue, which hits stores everywhere this Tuesday, November 24, with none other than Mr. Styles, on the cover.

Wait — are we sure it’s not actually Jimmy on the cover?