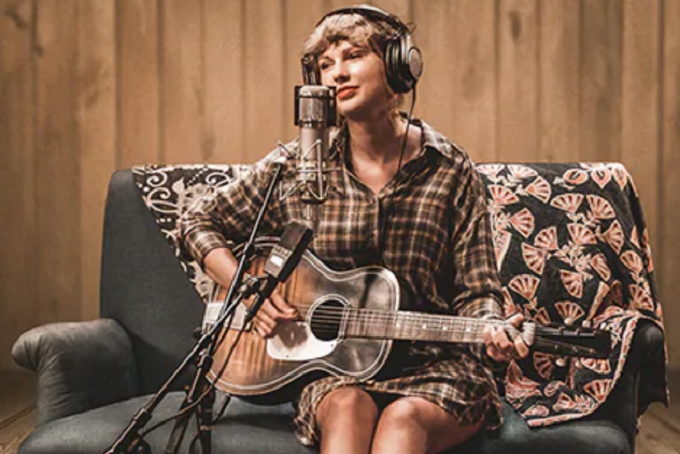 Last Wednesday, artist of the decade Taylor Swift released Folklore: The Long Pond Studio Sessions, a documentary focusing on her eighth studio album, Folklore, surprise-released on July 24. In the film, Swift not only performs the entirety of the album but also provides some insights about the creation and meanings behind each track. Along with folklore’s co-producers, The National’s Aaron Dessner and Bleachers’ Jack Antonoff, Swift reveals many secrets and confirms some fan theories about the album.

The most important revelation comes from Swift, who affirms that her boyfriend, actor Joe Alwyn, wrote the first verse in Grammy-nominated “Exile” and the chorus of “Betty” under the pseudonym of William Bowery. The singer stated: “So, William Bowery is Joe, as we know, and Joe plays the piano beautifully, and he’s always just playing and making things up… He was just singing [“Exile”] the way that the whole first verse is… I was entranced and asked if we could keep writing that one, and it was pretty obvious that it should be a duet because he’s got such a low voice and it sounded really good sung down there and in that register.”

Of course, Swift’s fans were sure about William Bowery’s true identity ever since the album came out, but they just needed to hear it from her. Regarding “Betty,” Antonoff could not believe Swift and Alwyn wrote it together. The producer stated: “I thought you were doing a bit when you were like, ‘Joe and I wrote a song.’ I thought it was gonna be like, you know, people write cute songs about their animals, in relationships… Then you sent it to me.” In the end, “Betty” instantly became a fan favorite.

Moreover, the documentary has many tearjerker moments, especially when Swift talks about sad songs such as “my tears ricochet,” “this is me trying” and “epiphany.” In Taylor’s own words: “it turned out that everybody needed a good cry as well as us.” The singer explains that “my tears ricochet” is about a friendship that used to be really good, but both parts ended up hating each other, and she compared it to a couple getting divorced.

One of the most interesting songs in folklore is “mirrorball,” which Swift wrote after she found out all her Lover Fest shows were canceled, and Taylor explained that it can be interpreted as a track about celebrities, but non-famous people can also relate to it: “It was a metaphor for celebrity, but it’s also a metaphor for so many people who have to feel like they have to be on for certain people. You have to be different versions of yourself for different people… That’s part of the human experience, but it’s also exhausting… You kind of learn that every one of us has the ability to become a shape-shifter, but what does that do to us?”

Definitely, Swift’s explanations of the tracks reflect the great amount of effort and love she put into creating Folklore, and Folklore: The Long Pond Studio Sessions shows how well-deserved the five Grammy nominations for the album are. To know that Swift decided to make this record without the pressure of it being the best-selling album of 2020 proves that she is one of, if not the best singer-songwriters in the world. Folklore debuted and spent eight weeks at number one in the Billboard 200 chart, becoming Taylor Swift’s seventh consecutive number-one album in the United States. Also, it broke the Guinness World Record for the biggest opening day for an album by a female artist on Spotify.

Undoubtedly, Folklore: The Long Pond Studio Sessions is a must-watch for both fans and casual listeners as the musician dives into what the songs mean to her as opposed to what people theorized they were about. Swift stated that she wanted people to place their experiences into the songs before explaining her own.

Thank you so much, I’m glad. Folklore is partly personal, partly fictional so I wanted there to be some time for everyone to assign it to their own experiences before I really weighed in about mine. Ya know? #folkloreOnDisneyPlus

folklore: the long pond studio sessions is available to watch now on Disney+. Also, you can stream the live versions straight from the documentary on Spotify. Below, you can listen to and watch the “Exile” performance featuring Bon Iver’s Justin Vernon.