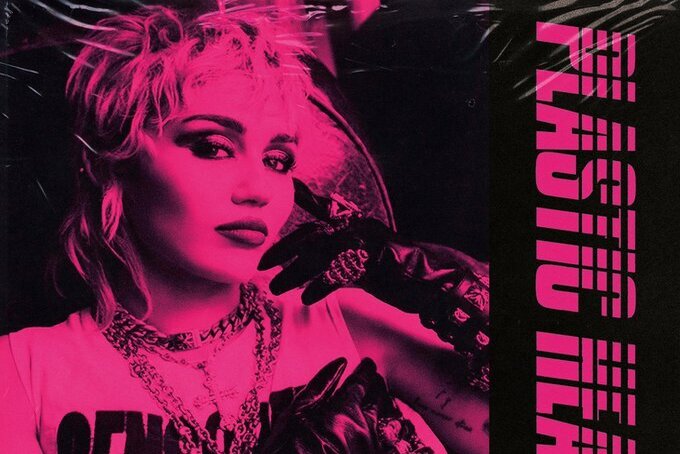 Many an artist has spoken about the difficulty of having to reinvent themselves with each passing album cycle, trying to hold the fickle attention of consumers whose affections tend to steer towards the shiny and new. A rarity, however, is full, unadulterated reincarnation with little resemblance of the artist left behind. Miley Cyrus is that rarity. In the past decade, she has bounced from harsh electro-pop to chart-topping hip-hop to indulgent psychedelic pop to muted, bluesy country. Each reincarnation is stranger than the last, proving her strength as a musical chameleon. On her seventh studio album, Plastic Hearts, Cyrus slips into a new skin, trying on polished glam pop-rock that may be the best fit yet.

Though, Plastic Hearts is, in Cyrus’ own words, a “rock album,” it bends the genre to its own will, flickering between classic rock and sugary pop. That being said, the record wears its influences on its sleeve, making it clear what sounds Cyrus aimed to emulate, but a rock album with pop sensibilities may be a more apt description. While her record may not stay solely in the rock lane, Cyrus herself is a full-blown rock star across the 12 tracks, going hell for leather with throaty vocals and gritty, unrelenting production.

The brilliance of Plastic Hearts is in its cohesion, standing out in Cyrus’ discography as a focused and thought-through collection in comparison to her previous efforts. It’s also, by far, her most vulnerable and raw record, laying her thoughts on the line, not filtered through the chart-friendly hip-hop production of Bangerz or the stale, lifeless country of Younger Now. Lead single “Midnight Sky” is just as delicious a bite of neon joy that it was when it arrived several months ago. “Gimmie What I Want” is a sexy, funky pop-rock track, while “WTF Do I Know” is a fine grungy post-divorce anthem that shows no mercy as Cyrus tears into her relationship. “Am I wrong that I moved on and I // And I don’t even miss you?” She roars.

Plastic Hearts feels like Cyrus’ most assured album, employing self-awareness rather than self-indulgence. “Hate Me” plays with the idea of wondering what it would take to get an ex to not hate you, while “High” is a subtle country number about that one you can’t get out of your mind. “Angels Like You” is a huge U2-esque stadium rock ballad that feels destined to be screamed by thousands. “Angels Like You” and the psychedelic-tinged penultimate track “Never Be Me”may well be Cyrus’ most self-aware efforts to take. On the former, her throaty vocals soar as she tells her lover that “it’s not your fault I ruin everything, while “Never Be Me” sees her admit “if you’re looking for stable, that’ll never be me.”

Cyrus is not someone to half-ass something, which is why her first official “rock” album arrives with both a mullet and guest spots from a variety of both genres’ finest. “Night Crawling” with Billy Idol may be the finest of the three, serving sleaze on this disco-punk party anthem. Cyrus and Idol have wonderful chemistry, their vocals pushing each other towards greatness. Dua Lipa appears on the record’s second single “Prisoner,” which strays the furthest towards pop that the record dares to go, plucking inspiration from Olivia Newton John’s “Physical”with twinges of KISS sprinkled in for good measure. The least successful of the three is the Joan Jett featuring ‘Bad Karma’. Though hardly a misfire, the track fails to match the energy of the other two.

While the last decade has been fruitful for Cyrus, it’s hard not to see them as mere stepping stones to the brilliance of Plastic Hearts, plucking inspiration from the best tracks of her back catalogue. The title Plastic Hearts may point to a sinister lack of depth, but at its core, this record is Cyrus at her most alive.