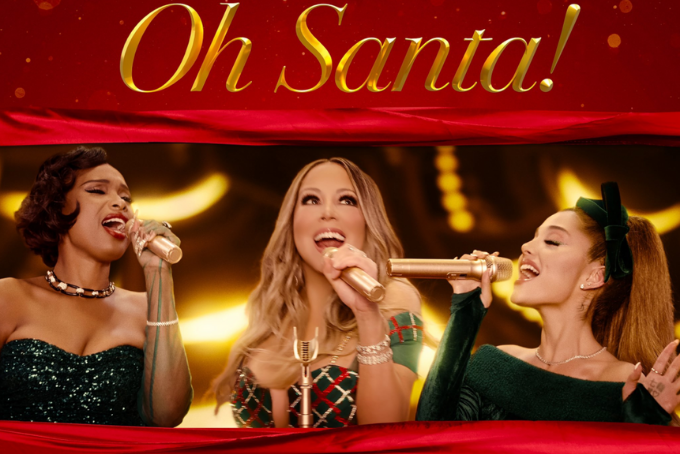 As far as music goes, the month of December belongs to Mariah Carey and Mariah Carey only. The inescapable “All I Want For Christmas Is You” is a holiday staple that rightfully continues to grow in popularity. But, even the Queen of Christmas needs a little help spreading holiday cheer every now and then. In a move that surprised fans across the globe, Carey tapped superstars Ariana Grande and Jennifer Hudson for a remix of 2010’s “Oh Santa!” that’s so festive, we simply can’t stop playing it.

Mimi’s solo version of “Oh Santa!” was released a decade ago as the lead single from her second Christmas album, Merry Christmas II You. After re-recording her vocals, she has provided an updated version of the track that’s even more jolly than the original. Additionally, Jennifer Hudson’s stellar voice elevates the song to soaring heights, which is no surprise to anyone familiar with the former American Idol contestant. Ariana Grande shockingly remains grounded throughout the majority of the track, but watching her belt high notes alongside Mimi is a moment for the ages.

Including Grande in the remix was a power move that no one could’ve predicted. Arianators and Lambs alike are aware of the influence that Carey has on Grande as an artist. The “Thank U, Next” singer reminded us of her admiration, reposting a tweet from 2011 where she tweeted a simple “I love you” at the iconic diva. Watching the pair come together for a Christmas remix was nothing short of mind-blowing, as it’s a moment that fans have been patiently awaiting for years.

It wouldn’t be an exaggeration to say that the revamped “Oh Santa!” saved 2020. Watching Jennifer Hudson, Mariah Carey and Ariana Grande — the girl group of our wildest dreams — spread holiday cheer is an absolute delight. You can listen to “Oh Santa!” below and watch Mariah Carey’s Magical Christmas Special on Apple TV+.