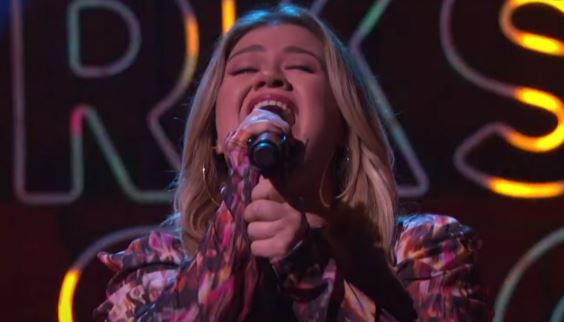 Kelly Clarkson has done it again, proving that she has the vocals to cover virtually any genre. Last week, Clarkson put her own rock spin on Ariana Grande’s pop hit “No Tears Left to Cry,” leaving a powerful message to fans in these unprecedented times. The cover was performed during Clarkson’s talk show bit “Kellyoke” last Thursday.

The song was originally released as the first single of Grande’s fourth studio album Sweetener in 2018, peaking at No. 3 on the Billboard Hot 100. In the most satisfying way, Clarkson and her band Y’all translate this major pop song into a soulful rock cover incorporating electric guitars and heavy drums. The 38-year-old singer adds a more raspy, heartfelt tone to the rendition which complements the high energy of the band perfectly.

“Kellyoke” showcases Clarkson’s universal voice and highlights her ability to adapt to virtually any song. Earlier in the week, she covered a variety of hits ranging from Justin Bieber’s “Sorry” to Tina Turner’s “A Fool In Love.” After nearly two decades of her career in music, we are happy to see the singer simply having fun while accepting the challenge to cover an epic amount of songs from different decades.

Watch Kelly Clarkson’s rockin’ cover of “No Tears Left to Cry” below! Be sure to tweet us what you think she should cover next @Soundigest!