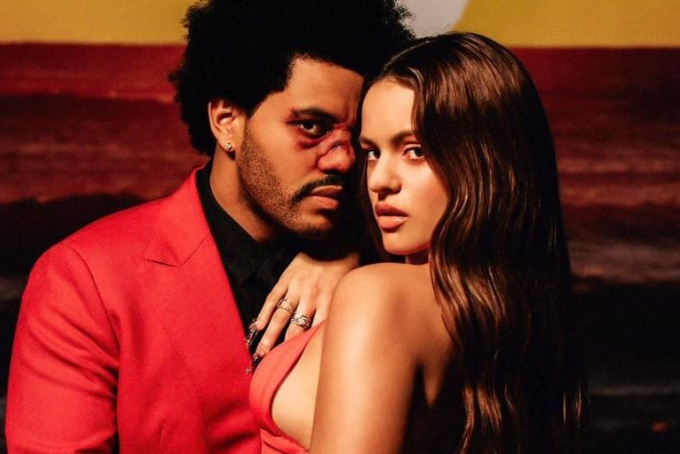 The Weeknd released a remix of his chart-topping single, “Blinding Lights,” featuring Spanish pop star Rosalía last Friday, December 4. “Blinding Lights” is one of the hit singles off The Weeknd’s latest album, After Hours.

At first listen, we weren’t so sure Rosalía fit into this song. However, after listening again, and again, we’re having a hard time getting her dreamy vocals out of our heads. Rosalía adds a certain feminine flair, and the harmonies between the two artists make the song that much more interesting. Rosalía also sings in Spanish on the remixed track, which always adds some level of intrigue to a tune.

In the official lyric video for the remix, you can see the two artists having a lot of fun, but also bringing a sensual touch to the song, adding some depth and maturity to it.

The Rosalía remix, which apparently has been in the works since early fall, arrives almost exactly a year after the track’s original release on Nov. 29, 2019. After Hours was released in March of this year, and subsequently smashed almost every record in music. The album broke the record for most pre-saves in Apple Music history and was in the Billboard Hot 200 Top 20 for 26 weeks.

The album also garnered over 3 billion streams on Spotify. “Blinding Lights,” was the biggest chart hit of the year, remaining in the Top 10 of the Billboard Hot 100 chart for 40 weeks. The album is 4X platinum, and The Weeknd is the first artist to ever rank at #1 on the Billboard 200, Hot 100, Artist 100, Hot 100 Songwriters and Hot 100 Producers charts simultaneously. It is no surprise that The Weeknd has continued his success post-album by adding many beloved artists and musicians on remixes of the most popular tracks from After Hours, including Kenny G and Doja Cat, to name a few. It remains to be seen why The Weeknd received not one Grammy nomination this year, as mentioned above he found amazing success with this release. However, we are definitely looking forward to his halftime performance at the Super Bowl!

Regardless, we thoroughly enjoyed the addition of the Spanish pop princess to this track, and hope to see more collaborations between the pair in the future.