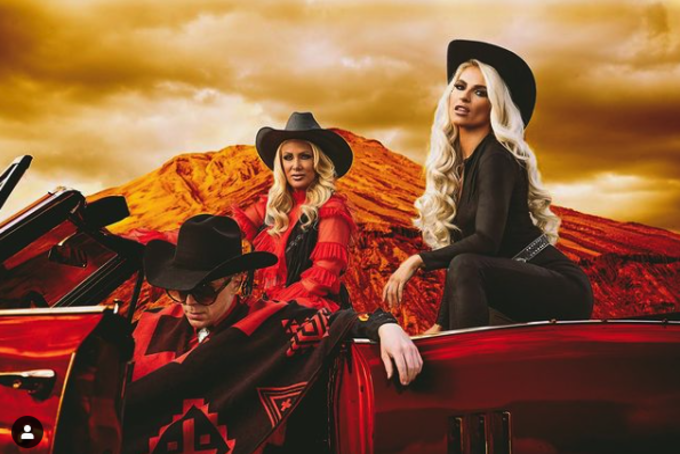 “We wanted our sound to come off as kind of wild”, explains Solomon Olds, “One part Nashville, one part Atlanta, and all parts Southern as Hell. We are calling it “Neon Outlaw” music.” A daring and bold fusion of hip-hop and country only Yacht Money can deliver, their sound is so interesting. It could resemble a mix of Daft Punk and Johnny Cash! We chatted with the duo consisting of power couple Lauren and Solomon Olds to hear about their jam “Fire Love,” how they’re surviving quarantine, and what’s in store for new music!

Both Lauren and Solomon started dipping into music at a young age, singing in church groups and schools plays, while growing up in Atlanta, GA. Their solo paths took them to being members of small groups and experimenting with hip-hop and R&B. They met working in one of the “Mega-Churches”, where Lauren assisted her mom in the production process and Solomon helped run the sound system. Sparks flew, they fell in-love, and shared each other’s company while crafting melodies for a demo! They’ve been together since 2002 and happier than ever! What a dream! “We moved from Atlanta to Nashville in early 2016 and we immediately started working with the songwriting and production scene,” Solomon says, “We made a few songs with some local artists and they started to push us to release our own music after hearing it. Yacht Money was formed in early 2018 and we have been releasing our own songs since.”

“Fire Love,” which features vocals from Gabrielle Mooney, is truly unique in quality and vibe. Written alongside Mooney and Nashville DJ Jonny Grande, it grabs our attention. “We blended up something that sounded like an old Johnny Cash song,” describes Solomon, “with some 808s, dusty Spaghetti Western guitars, and a pinch of Dolly Parton like vocals. The sound is something that sounds like a Tarantino movie soundtrack. It’s epic!” We agree!

The duo is hard at work, hoping to release a full-length album in 2021. Their studio-space has been a second home during quarantine, where music is a sweet escape. “We’ve definitely gone through the rush of emotion and panic during this time, but then you have to pick yourself up and get busy, this is the new world that we are living in and keeping busy with something you love to do keeps the sad times at a minimum.” Such wise words, and a great way to react to our challenging times!

When the music’s over for the day, Yacht Money has been getting fresh air and re-connecting with nature to help the blues! “On our 2 acres in Brentwood, TN, we’re finding ways to keep happy. The fire pit on our back porch is a great stress reliever!”

Check out their songs to hear for yourself how incredible their sound is! As Solomon and Lauren say, “There are no rules here. Take an old dusty sample- put some hard beats behind it-then throw in some vocoders and synth like elements ala Daft Punk. Now make it sound like you are in a drop top car chase scene driving across the Utah Desert and you have the Yacht Money sound!