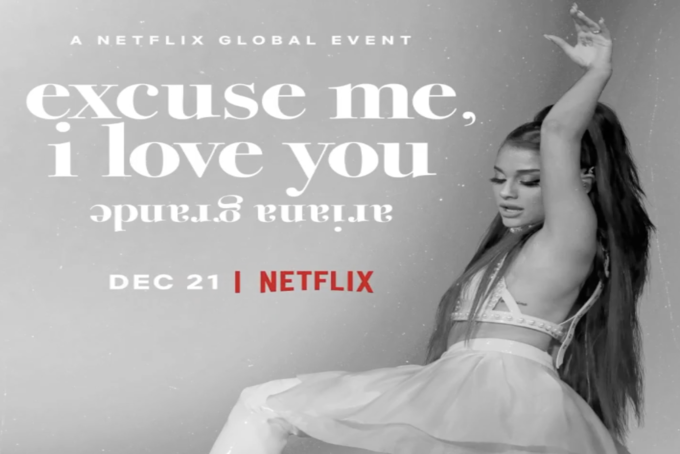 The 2020 holiday season has been bittersweet for most people. Many of us are just waiting to wrap up this rollercoaster of a year and put it behind us. Though there have been no concerts for the majority of this year, and no set date for their return, Ariana Grande has found a way to bring her live music into our homes — just in time to ring in the new year.

The singer recently announced the release of her new Netflix documentary, titled Excuse Me, I Love You, which is set to premiere on Monday, December 21. The film will be an hour and 37 minutes long, sharing concert and behind-the-scenes footage from the London date of her 2019 Sweetener World Tour, which featured music from her albums Sweetener and Thank U, Next.

The feature comes just one year after the final date of Grande’s 2019 tour, which spanned nine months and stopped in 101 different cities. The young singer brought the show to London’s infamous O2 Arena in early August.

Taking to Twitter and Instagram, Grande and Netflix have both shared exclusive information and teasers regarding special clips and social media features surrounding the release.

To date, we can check off the custom gifs and exclusive first look, but we’re all on the edge of our seats for what’s to come in the next week. The clip showcases Grande performing her hit song, Everytime to a very excited crowd, and we can only imagine what other surprises and performances she has in store for us.

As you wind down the year and celebrate this unique holiday season, be sure to gather up your loved ones (socially-distanced, of course) and gather around for this one-of-a-kind concert event right from the comfort of your own home.

If you haven’t already, check out the official trailer below.

2 thoughts on “Everything We Know About Ariana Grande’s New Excuse Me, I Love You Netflix Documentary”