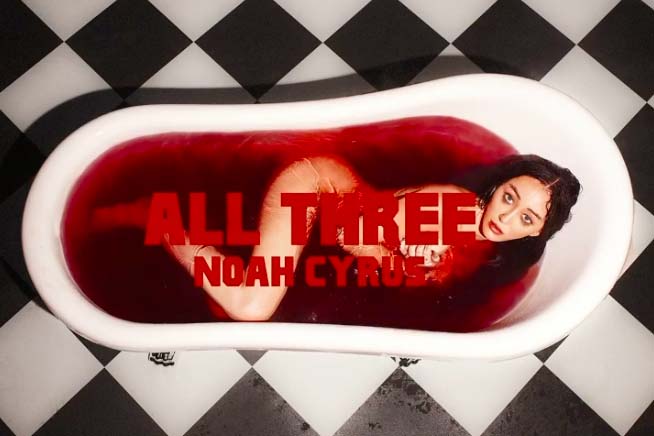 Noah Cyrus’ latest release finds her playing a game impossible to win with a toxic lover in her new single “All Three.” This release follows the singers The End of Everything EP that was released in may of last year featuring her hit single “July.” In the 20 year olds new song “All Three” she tells the story of being stuck in a toxic relationship, even though she knows deep down she deserves better.

She describes her partner in the song as being her nemesis and also her best friend and pines for someone better in the chorus singing “But darling if I could // I would fall for someonе good // Someone good for me”. She ultimately admits that she’s completely consumed by this person and their games by continuing “But wе’re suckers for the thrill // Playing f**k, marry, and kill // Honey, you’re all three.”

The soft intimate pop track sounds almost angelic with the singer harmonizing with herself in the chorus. She gets even more intimate in the sultry video for “All Three” as we see the singer at her most vulnerable, emotionally and physically as she reflects on her relationship in a scarlet colored bath. It’s a little (okay, a lot) goth — and this paired with big sister Miley Cyrus’ pseudo-punk phase, we can’t help but wonder if the Cyrus sisters are going through something.

You can check out the newly Grammy nominated singers new video for her single “All Three” down below.